Christmas in Northern Iceland may look like a holiday postcard, but Ragnar Jónasson’s Whiteout proves that the ghosts of the past continue to haunt regardless of the calendar date.

Just days before the holiday, Ari Thór’s former boss, Tómas, asked the Siglufjörđur detective to consult on a strange case further north. Unwilling to leave his pregnant girlfriend during the holiday season, Ari convinces Kristín to join him on the journey. She agrees, so with hopes of being home again before Christmas Eve, they set off for Kálfshamarvík. 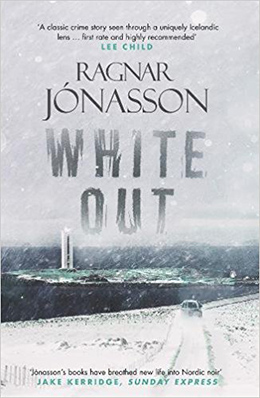 That remote town was the scene of a tragic death. A woman’s body was found at the base of a cliff, but it is unclear if she jumped, was pushed, or simply accidentally stood too close to the edge. When Ari Thór and Tómas discover that the young woman’s mother and sister both died years earlier in exactly the same tragic way (in two separate instances), the already odd case becomes even more baffling.

The suspect pool is narrowed down to a small group – all four of who were present at each of the deaths. Ragnar Jónasson skillfully documents the interrogation techniques of his two detectives, with Kristín occasionally providing an outsider’s opinion. Since the deaths span years, gathering the necessary evidence is far from an easy task. It is made all the more complicated because each of the suspects has reason to be evasive.

As a title, Whiteout works so well as a metaphor for this investigation. Meteorologically speaking, a whiteout involves blizzard-like conditions where the blowing snow severely impacts visibility. Similarly, Ari Thór and Tómas are so caught up in the chaos of the current case, they are in danger of overlooking some critical clues.

Mention must be made of the wonderful translation work of Quentin Bates. The novel feels organic and shows none of the clunkiness present in some translated works. By maintaining the same translator across the series, Orenda Books ensures that readers feel on comfortable ground as they come to each new Jónasson novel.

In the Dark Iceland series, Ragnar Jónasson has proven that it is possible to blend the traditional traits of the cozy crime novel with the darkness of the noir genre. The novels continue to get better – which is saying a lot, since Snowblind was such an impressive debut. The fact that these books appeal these two vastly different reading populations highlights just how unique they truly are.

Ragnar Jónasson’s next translated novel will be the start of a new series, but it is unclear if the Dark Iceland books are complete or simply taking a short hiatus. Either way, these five novels deserve to be part of every crime connoisseur’s collection.