Monica Hesse’s American Fire: Love, Arson, and Life in a Vanishing Land is a non-fiction book examining a string of arsons that plagued a Virginia county in the Fall of 2012 and Spring of 2013. In looking at the case from first burning ember through to conviction, Hesse explores the cultural, emotional, and economic factors at play – circumstances that in many ways led to the inevitability of disillusionment and eventually to a senseless crime wave.

Monica Hesse’s reporting could not be more accessible. With easy-to-read chapters, logical transitions, and a fascinating central focus, true crime fanatics will consume this book faster than the flames engulfed those abandoned structures. But this is more than just a story of a crime spree; it’s an accounting of how our rural homesteads have become wastelands, forgotten by all, except those people who call such places home. 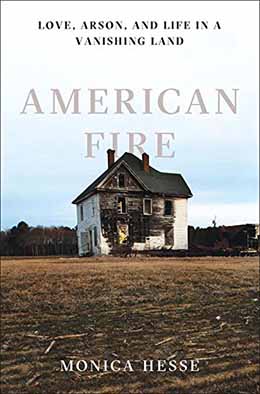 The two perpetrators of these arsons, Charlie Smith and Tonya Bundick, are tailor-made to be the focus of a deep study. On the surface, they seem not that different from you or I, but when placed together, they become an incendiary force of nature destined for destruction – both externally and internally. There is an engrossing chapter in the book that takes the reader though an accounting of two-person crime sprees – think Bonnie and Clyde, Leopold and Loeb, etc. – and these two easily join the ranks of those infamous duos.

Accomack County, Virginia becomes not only the setting for these horrendous arsons, but it also becomes a character in and of itself within American Fire. By documenting the steady decline of this eastern shore community from its heyday to modern day, Hesse outlines to the reader how economic situations affect not only the viability of a location, but also the pride and prospects of the people who live there. Readers get to know residents of this area and will feel a connection to those whose only crime was where they were birth. As she takes readers through the fear, suspicion, and paranoia that permeates this tight-knit community, Hesse exposes the raw nerves that exist just under the surface.

American Fire: Love, Arson, and Life in a Vanishing Land is a virtuoso performance and will leave readers hoping that Monica Hesse finds another fascinating subject for her next true crime book sooner rather than later.