The start of another week brings another list of books to read. Our eclectic list this week is sure to contain something for every reading taste. Happy Spring! 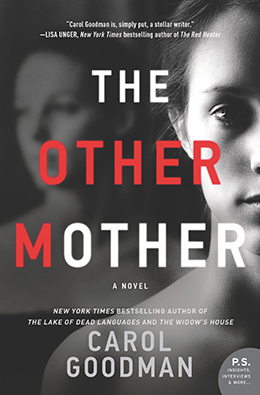 Carol Goodman has written another twisty, gothic-tinged tale – this one focused on the dark side of motherhood. Look for my review of this one tomorrow, but if you haven’t read Carol Goodman yet – you simply must!

From the author of the internationally bestselling The Lake of Dead Languages comes a gripping novel about madness, motherhood, love, and trust.

When Daphne Marist and her infant daughter, Chloe, pull up the gravel drive to the home of Daphne’s new employer, it feels like they’ve entered a whole new world. Tucked in the Catskills, the stone mansion looks like something out of a fairy tale, its lush landscaping hiding the view of the mental asylum just beyond its border. Daphne secured the live-in position using an assumed name and fake credentials, telling no one that she’s on the run from a controlling husband who has threatened to take her daughter away.

Daphne’s new life is a far cry from the one she had in Westchester where, just months before, she and her husband welcomed little Chloe. From the start, Daphne tries to be a good mother, but she’s plagued by dark moods and intrusive thoughts that convince her she’s capable of harming her own daughter. When Daphne is diagnosed with Post Partum Mood Disorder, her downward spiral feels unstoppable—until she meets Laurel Hobbes.

Laurel, who also has a daughter named Chloe, is everything Daphne isn’t: charismatic, sophisticated, fearless. They immediately form an intense friendship, revealing secrets to one another they thought they’d never share. Soon, they start to look alike, dress alike, and talk alike, their lives mirroring one another in strange and disturbing ways. But Daphne realizes only too late that being friends with Laurel will come at a very shocking price—one that will ultimately lead her to that towering mansion in the Catskills where terrifying, long-hidden truths will finally be revealed…. 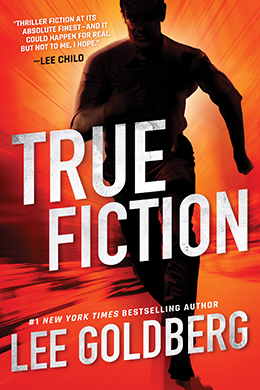 Ian Ludlow is a hero like no other and Lee Goldberg is the perfect author to bring him to life. This is the start of a new series and by all accounts, I expect we’ll be following Ian on crazy adventures for years to come.

When a passenger jet crashes onto the beaches of Waikiki, bestselling thriller writer Ian Ludlow knows the horrific tragedy wasn’t an accident.

Years before, the CIA enlisted Ian to dream up terrorism scenarios to prepare the government for nightmares they couldn’t imagine. Now one of those schemes has come true, and Ian is the only person alive who knows how it was done…and who is behind the plot. That makes him too dangerous to live.

Ian goes on the run, sweeping up an innocent bystander in his plight—Margo French, a dog walker and aspiring singer. They are pursued by assassins and an all-seeing global-intelligence network that won’t stop until Ian and Margo are dead. Ian has written thrillers like this before, but this time he doesn’t know how it’s going to end—or if he will be alive to find out. 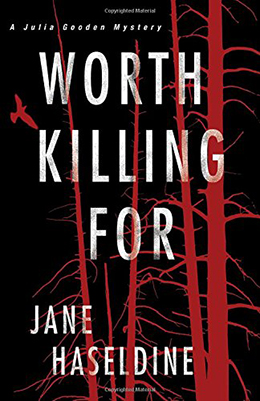 This is the third is Haseldine’s series featuring reporter Julia Gooden – and it may just be the best one yet. Fans of the series will finally get some answers they have been longing for as the personal mystery that has haunted Julia since childhood finally comes to the forefront.

Detroit newspaper reporter Julia Gooden returns in a twisting, superbly assured new mystery, where a brutal murder and a father’s sudden return may provide the answers she’s spent decades searching for . . . or lead deep into a fatal trap.

The past never really leaves us. Crime reporter Julia Gooden sees proof of this every day in her stories. A dark childhood, a negligent parent, early abandonment—any one of them can seal a person’s fate as either a villain or victim. Julia, who experienced all three, seems to have beaten the odds, finding happiness raising her two sons and a blossoming relationship with detective Raymond Navarro.

But now, after three decades of absence, Julia’s conman father has resurfaced to throw her life into turmoil again. Julia was only seven when Duke Gooden abruptly left. Barely a month later, her nine-year-old brother, Ben, disappeared. Ben was her hero and protector, and though the case is cold, Julia has never given up hope of finding him. Duke’s return offers vital clues—but it also makes her a target of those who intend to see Duke punished for his many sins.

When Julia investigates the death of a city councilman’s young nephew, she finds links to a string of other murders . . . and to a web of greed and kidnapping that stretches back decades. At long last, Julia may be able to discover what happened to Ben all those years ago, but only if she’s willing to risk everything in her present . . . 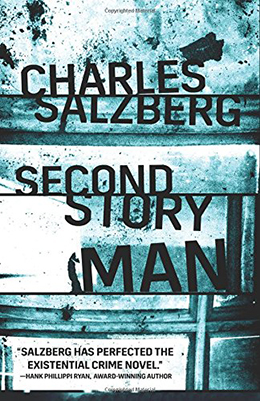 I haven’t read this one yet, but the fascinating real-life inspirations for master burglar, Francis Hoyt, are certainly to make this novel have appeal to readers interested in how true crime intersects with crime fiction.

Francis Hoyt, arrogant, athletic, brilliant, manipulative and ruthless, is a master burglar. He specializes in stealing high-end silver, breaking into homes that seem impenetrable. He’s never been caught in the act, although he has spent some time in prison on a related charge, time he used to hone his craft and make valuable connections. (Hoyt is based on two real-life master burglars: the so-called Dinnertime Bandit, who only stole when his victims were home, and The Silver Thief, who was only interested in high-end silver). Hoyt follows the money. In the winter, he works down south, primarily in southern Florida and Georgia, around the Atlanta area. Summers, he moves back up north, where he plies his trade in New York, New Jersey, Connecticut and Massachusetts.