I am happy to welcome Matthew Iden to BOLO Books today. Matthew has written within a wide variety of sub-genres, with most of them landing at various locations along the mystery/thriller continuum. When I heard more about his new novel – launching today! – I knew that the followers of BOLO Books would be interested in checking this one out. Let’s see what Matt has to say about the new book, take a look at the cover, and read the jacket blurb. After all that, i suspect you will be ordering this new book immediately.

MATTHEW IDEN:  Some books ideas pop into your head as nothing more than a title, some with the final page already written. A few, if you’re lucky, solve a problem right out of the gate or give you the starting point from which you can tease out your tale.

In my case, Birthday Girl started with a vision, but was it the beginning? The middle? The end? I had no idea. It came to me, fully formed and sitting in my mind:

Around a rough-hewn kitchen table crowd a half dozen children, staring at a cake. Their features glow strangely, because the lights are off and a small forest of birthday candles—just stubs, really, obviously used and reused—provide the only illumination. Hunger wars with fear on their faces, but I’m not sure where the fear comes from or why none of them sneak a finger out to swipe a bit of icing. Or laugh. Or shout.

From a dark corner of the room, an adult’s voice suddenly commands, Sing! and after a short pause a halting, reedy version of “Happy Birthday” fills the room. It’s for someone named Charlie. The final words …to you trail off in tatters. The candles burn down and a young boy—older than the others, with fuzz on the cheeks and chin—leans forward and blows the flames out. The room is plunged in darkness but before the last ember dies away, one of the children begins to cry.

Birthday Girl was the hardest book I’ve written, and not just because of this disturbing scene that wouldn’t leave me for more than a year. I knew, even before getting into my next project, that I wanted to deal with some of our society’s thornier social problems: homelessness and our response to it, how we deal with mental health issues, and the effect of violence and trauma when it is visited on the young. Lurking in the wings were even deeper and larger philosophical questions of loss and abandonment, of redemption and reinvention.

I’m not sure I did those items justice—or even could in a single book—but I do know I finally figured out who those children around the table were, who they were singing to, and whose voice it was that came from the corner…the one that the children didn’t dare disappoint. 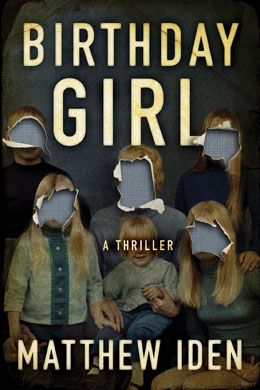 He’s as lost as the victims he failed to find…

Eight years ago, Elliott Nash’s daughter was murdered. Since then, everything the brilliant former criminal psychologist had is a memory—his child, his career, his wife, and his home. Now he lives on the streets around Washington, DC, with only a bottomless well of guilt and nightmares to make him feel alive. Until Amy Scowcroft solicits his help.

She refuses to believe that her daughter, Lacey, who was kidnapped a year before, is dead. To the police, it’s a case gone cold. To Elliott, it’s redemption. In fact, Amy has stumbled upon an unnerving new clue: Lacey is just one of seven children from broken homes who vanished near their birthdays. Right now, it’s all they have to run with. Right now, they have no idea where the chase will lead.

As Elliott navigates the streets he knows so well, he and Amy will discover how dark they are—and how many secrets they conceal. Because in a search this harrowing, everybody has something to hide.

Well, it doesn’t get more creepy than that. But it also sounds socially conscious, original, and moving. Here are some links to make your purchasing easier: