Towards the end of Stephen Sondheim’s musical Into the Woods, the Witch sings the lines “Careful the things you say, children will listen.” This is advice that Asako Adachi, the mother at the center of Kanae Minato’s Edgar Award-nominated novel Penance, should have followed.

Penance is an episodically structured novel that becomes more brilliant as the various parts converge to reveal the truth. Each of the extended chapters tells its tale in a unique way – there’s a personal letter, a press conference, and an interrogation to name just a few. What ties these stories together is that each of them stem from the same core event:

When they were ten-years-old, five childhood friends gather to play volleyball in the schoolyard. A strange man approaches saying that he has been tasked with fixing the air-conditioning inside the school, but he needs help reaching the upper vent. All of the girls volunteer, but the man chooses Emili Adachi. As the reader already suspects, this will end in tragedy. But it is the unfortunate actions of one adult that then sets into motion a series of life-altering decisions. 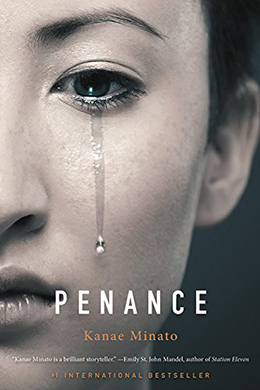 Emili’s mother, in her grief, blames the other girls. She tells them that they should have been the ones to die and if they have any hope of a future, they must find the killer or do penance to justify their survival. These are harsh words for young girls and each of them interpret and enact this “commandment” in different ways as they grow.

Each of these girls tells their story in the first four chapters of the novel. One by one they explain their version of that tragic afternoon. After Emili’s body was discovered, each girl took on a different task (telling the police, watching the body, finding a teacher, and telling Mrs. Adachi) so because they were separated, their tales diverge from that point forward. Each chapter goes on to tell readers about the lives of each character for years after the murder. These chapters read almost like self-contained short stories documenting the lives of multiple witnesses to the same horrific event.

The final section of the novel comes from the perspective of Emili’s mother, Asako. In it, she explains her reaction to the news of her daughter’s death and presents readers with her life story.

Penance only works because each of these tales contains vital information regarding the murder, but they all must be read before that truth becomes clear. The lives these characters experience are dark, often depressing, and never short of spellbinding. Kanae Minato’s writing feels almost like a classic fairy tale – one from which the reader hopes to learn some important life lesson. Even the key components in the novel feel like folklore – French dolls, isolated villages, special “air,” and always at the core, Japanese culture.

Penance is a tightly-constructed 240-ish pages. While it could easily be read in minimal sittings, the depth of despair within each tale will have readers taking things slowly; but the draw to know the truth is powerful and will keep readers returning for each subsequent tale. Once all is revealed there is a sense of closure, something that both the reader and the characters within the novel desperately need.