It is rare that readers can escape into a debut that is so assured and well written that it feels like one is in the hands of an esteemed veteran of the literary world; but that is exactly the experience had while reading Christine Mangan’s Tangerine.

The bulk of Tangerine takes place in Tangier, Morocco in 1956. Alice Shipley has relocated to this exotic location with her husband. Unsure of herself, coddled by her spouse, and surrounded by foreign people and culture, Alice is completely out of her element. So when her old friend, Lucy Mason, unexpectedly arrives at her doorstep, she is wrong-footed enough to welcome her into their abode. 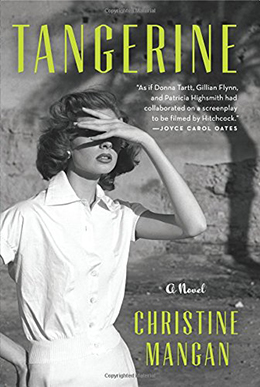 A year prior, Alice and Lucy had been roommates at Bennington College. Their friendship at the esteemed women’s educational facility was both immediate and resilient. That is until a tragic accident spirals out of control and their hypnotic bond is forever shattered. Well, maybe not forever…

Alice and Lucy begin to explore the depths of Tangier’s charms together and it seems like old times. But then, Alice’s husband goes missing and old jealousies rise to the surface, suspicion haunts every shadowed corner, and the very edge of sanity is reached.

Christine Mangan has crafted a female friendship that embodies both the love and danger such strong unions can induce. With prose that, like the best of Patricia Highsmith, is both seductive and mesmerizing, Mangan lures readers in as voyeurs to the unique connection between Alice and Lucy. Mangan treads the fine line between depicting the fierce loyalty women feel for each other and the risks associated with all-consuming jealousy. Like any such line, these are fluid things and that idea keeps the reader betwixt and between on where reality resides.

The unfamiliar setting of Tangier, Morocco becomes another chain hooking readers to the pages of this novel. Christine Mangan’s descriptions of the crowded marketplaces, overbearing humidity, and lush accouterments surrounding our lead characters transports readers to this historical setting – a country on the brink of revolution. Readers can almost feel the sweat on their hands as they turn the pages and smell the unique scents that permeate the air.

Debuts this strong do not come along often. I fully expect that Christine Mangan and Tangerine will be mentioned throughout the year and as year-end round-ups and award season once again descend upon us. Film rights for this one have already sold which is no surprise given that the novel oozes a vintage black and white film-nourish vibe – one that places female friendship at the forefront, dissecting its complexity for better or for worse. In the end, the reader is the real winner.