What You Want To See – The BOLO Books Review

When your debut novel is as universally enjoyed and critically acclaimed as Kristen Lepionka’s The Last Place You Look was, the pressure for the follow-up can be over-whelming. None of that fear makes it to the pages of What You Want To See. This second novel in the Roxane Weary series has all the hallmarks that made the debut so popular, but also pushes things forward at just the right speed and in just the right way.

What You Want To See finds Roxane Weary taking on a new case for a client named Arthur Ungless. At first his fiancé is simply missing, but by page two, Roxane has discovered that Marin Strasser is dead. As happens in these PI novels, the unexplained death is the least strange thing about Marin’s history. Roxane would love to just move on to the next case, but her loyalty and the need for a paycheck won’t allow that.

Roxane’s investigation takes her from one lead to the next until eventually she bumps against another active police inquiry. Needless to say, Roxane needs the support of her on-again off-again ex-lover Tom to help smooth things over with the other police officials. Roxane’s attitude, skills, and recklessness have made her persona non grata around most professionals, but she is hardly one to let such small things get in the way of success. Her constant personal struggle with a drinking habit, on the other hand, might be more of a challenge. 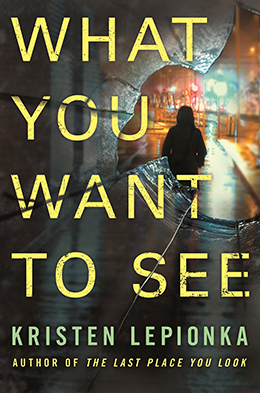 The case uncovers a multitude of criminal activities: everything from real estate fraud to counterfeit documents. All of this fits together in convoluted ways that only Roxane Weary can determine. But at what cost?

Many reader favorites from the first novel return here to varying degrees: Shelby and her father, Roxane’s brother Andrew, and of course, both Tom and Catherine. Roxane’s romantic shenanigans have become no less complicated and that goes a long way towards making this series feel so fresh and vital. By the end, a bit of a choice has been made – but only to an extent – and readers will certainly get the sense that Roxane may not yet be ready to abandon her wild ways – nor should she be. Seeing a woman so in control of her fluid sexuality is rare and will resonate as empowering for those that are able to avoid judgment.

Along with the truly unique Roxane Weary, it is also the writing that helps Kristen Lepionka rise above the masses in PI literature. Lepionka brings her characters and the setting of Ohio to life with vivid descriptions and precise word-choice. Her writing is straight-forward yet never boring. She expertly navigates chapter length in a way that keeps the investigation moving ever forward while also allowing for brief pauses to foster deeper character development – all in a naturalistic and authentic way.

Roxane Weary – and her creator Kristen Lepionka – will be part of the crime fiction family for years to come. This is an award-worthy series that has legs. Readers are encouraged to make Roxane’s acquaintance now as there is simply no telling what the future holds for the one-of-a-kind heroine.

BUY LINKS: What You Want To See by Kristen Lepionka