It is shameful that the names of these boys, aged 12 – 19, are not known by more people – especially Americans. The talented team of John Kander and Fred Ebb – the legends responsible for the music in shows like Cabaret, Chicago, and Kiss of the Spiderwoman – certainly did their part to rectify this memory gap. Along with book writer David Thompson, they created The Scottsboro Boys, a musical shining the spotlight on the sacrifices of these young men and the corrupt justice system that failed them. 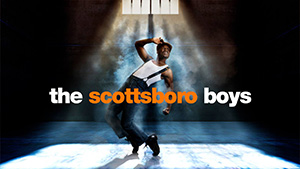 Now playing at The Signature Theatre in Shirlington, Virginia, The Scottsboro Boys couldn’t be timelier. The original NYC productions – both off-Broadway and on – were critically celebrated, but simply couldn’t draw the masses needed for lengthy stays. In some ways, this makes sense: The Scottsboro Boys is a tough show to watch, both depressing and educational, which is hardly what most theater-goers are looking for when seeing a show to see on the Great White Way. This is why it is so vital that regional theaters revive this stunning work. We, as a population, need to witness this show, need to pay tribute to these boys, and need to see the long history this country has of unfair treatment under the law.

Joe Calarco’s direction of the Signature production, along with Jared Grimes’ choreography, wisely pays homage to the original NYC versions. One of the main controversy’s surrounding the show is that it is structured as a minstrel show, except instead of having performers in black-face (as was so common in that art form), the stage is populated by African-American performers. Instead of celebrating our minstrel heritage, the show is written as a satire of the format and anyone who sees the show should come away understanding that this was never intended to be offensive, but rather an indictment of the racist nature of those type of shows.

The one white performer on the stage: in Signature’s case – Christopher Bloch – definitely comes across as one villain of the piece, but having the black actors play the roles of some of the other corrupt white folks so instrumental to this miscarriage of justice resonates with modern audiences in profound ways. But it is the Scottsboro boys themselves who are the true focus – in particular, Haywood Patterson (brought to vivid life by Lamont Walker II). After all, it is their story, their legacy.

In 1931 Alabama, these nine young men – boys, really – found themselves in the wrong place at the wrong time. When two white women, who happened to be traveling in drag under suspicious circumstances, accused them of rape in an effort to deflect attention from their own questionable behavior, the justice systems reacted swiftly. Over the course of years – and many, many trials – our legal system failed these citizens – even after one of the women completely recanted her testimony.

The musical numbers, including a wonderful tap showcase, serve to carry the audience through the piece. They highlight key moments in these boys’ journey. Once of my favorite local actors, Felicia Curry, plays the only woman in the cast. Her role is that of observer. She sits in theater chairs between the stage and the actual audience – and whenever particularly egregious behavior occurs on stage, she turns to the audience as if to say “don’t you see what is happening here?” and “Make this stop.” In many ways, she succeeds in making the audience feel their culpability. It isn’t until the final moments of the show that the importance of her presence comes fully to light – and it was a gasp-worthy moment for those who were not expecting it.

The only misstep I found in the production was the inclusion of a Black Lives Matter t-shirt during the curtain call. The theater-going audience certainly understands how this legacy led us to our current moment – and movement – so this choice seemed a tad bit condescending. It’s a minor thing and doesn’t affect the overall power of The Scottsboro Boys.

If you are in the MD/DC/VA area, please go see The Scottsboro Boys at the Signature Theatre. It runs through July 1st. Not only will be you get to see a very moving production, but you will witness one of the great regional theaters in our country doing what they do best.