Summer hours at my day job start this week, which means more time to read. And that couldn’t come at a more critical time. There are so many excellent books on the horizon, including this week, that no reader will go unsatisfied. 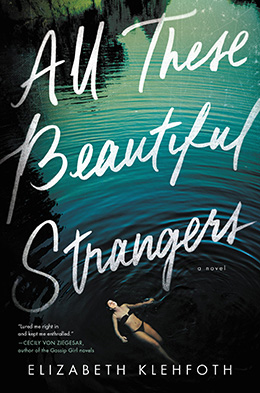 Fans of academic mysteries and secret societies will find much to love in this story of revenge. Kelhfoth’s writing style is perfect for beach reading and the melodramatic plot will ensure that extra suntan lotion is needed because readers will be unable to put this one down.

A young woman haunted by a family tragedy is caught up in a dangerous web of lies and deception involving a secret society in this highly charged, addictive psychological thriller that combines the dishy gamesmanship of Gossip Girl with the murky atmosphere of The Secret History.

One summer day, Grace Fairchild, the beautiful young wife of real estate mogul Alistair Calloway, vanished from the family’s lake house without a trace, leaving behind her seven-year old daughter, Charlie, and a slew of unanswered questions.

Years later, seventeen-year-old Charlie still struggles with the dark legacy of her family name and the mystery surrounding her mother. Determined to finally let go of the past, she throws herself into life at Knollwood, the prestigious New England school she attends. Charlie quickly becomes friends with Knollwood’s “it” crowd.

Charlie has also been tapped by the A’s—the school’s elite secret society well known for terrorizing the faculty, administration, and their enemies. To become a member of the A’s, Charlie must play The Game, a semester-long, diabolical high-stakes scavenger hunt that will jeopardize her friendships, her reputation, even her place at Knollwood.

As the dark events of past and present converge, Charlie begins to fear that she may not survive the terrible truth about her family, her school, and her own life. 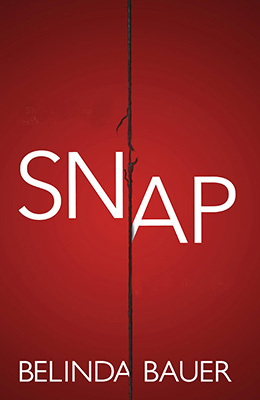 Anyone who doubts that crime fiction can still work when it wears its heart on its sleeve need only pick up this new masterpiece from Belinda Bauer to be convinced otherwise. Readers will fall in love with these characters and that means the stakes will be even higher as they venture deeper into troubled territory.

Jack’s in charge, said his mother as she disappeared up the road to get help. I won’t be long. Now eleven-year-old Jack and his two sisters wait on the hard shoulder in their stifling, broken-down car, bickering and whining and playing I-Spy until she comes back.

But their mother doesn’t come back. She never comes back. And after that long, hot summer’s day, nothing will ever be the same again.

Three years later, Jack’s fifteen now and still in charge . . . alone in the house. Meanwhile across town, a young woman called Catherine While wakes to find a knife beside her bed, and a note reading I could of killed you. The police are tracking a mysterious burglar they call Goldilocks, for his habit of sleeping in the beds of the houses he robs, but Catherine doesn’t see the point of involving the police. And Jack, very suddenly, may be on the verge of finding out who killed his mother.

A twisty, masterfully written novel that will have readers on the edge of their seats, Snap is Belinda Bauer at the height of her powers. 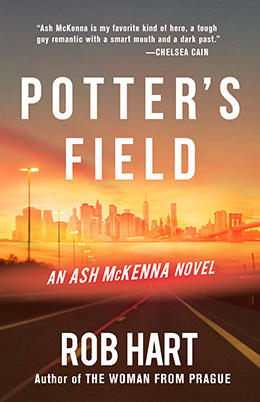 Rob Hart brings his Ash McKenna series to a close by returning to where it all started. Readers first met Ginny Tonic in Hart’s debut, New Yorked, and she once again plays a major role in Ash’s first official private investigation gig. But returning home comes with other issues for Ash McKenna as well. Just a gritty as the entire series, Potter’s Field displays a new level of maturity which will leave readers anxious for Mr. Hart’s highly-anticipated and already buzz-worthy stand-alone debut, The Warehouse (out next year).

Amateur private investigator Ash McKenna is home. After more than a year on the road he’s ready to face the demons he ran away from in New York City. And he’s decided what he wants to do with his life: Become a private investigator, for real. Licensed and everything. No more working as a thug for hire. But within moments of stepping off the plane, Ginny Tonic, the drag queen crime lord who once employed him―and then tried to have him killed―asks to see him.

One of her newest drag queen soldiers has gone missing, and Ginny suspects she’s been ensnared by the burgeoning heroin scene on Staten Island. Ginny wants Ash to find her. Because he’s the best, and because he knows Staten Island, his home borough. Ash is hesitant―but Ginny’s offer of $10,000 is enough to get him on his feet. And the thought of a lost kid and a bereft family is too much for him to bear.

He accepts, and quickly learns there’s something much bigger at play. Some very dangerous people are vying for control of the heroin trade on Staten Island, which is recording the highest rate of overdose deaths in the city. As Ash navigates deadly terrain, he find his most dangerous adversary might be his own past. Because those demons he ran away from have been waiting for him to come back. 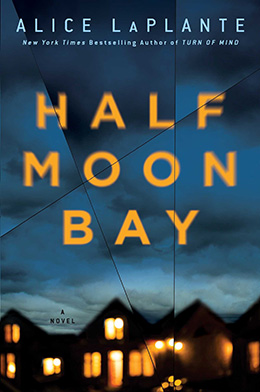 Alice LaPlante’s novels have traveled the psychological suspense spectrum. With this new novel, she is firmly in domestic suspense territory and readers are going to love this ride. I’d say that it is perfect for reading outside on a summer evening, but you are going to want to keep your doors locked for this one.

Jane loses everything when her teenage daughter is killed in a senseless accident. Jane is devastated, but sometime later, she makes one tiny stab at a new life: she moves from San Francisco to the tiny seaside town of Half Moon Bay. She is inconsolable, and yet, as the months go by, she is able to cobble together some version of a job, of friends, of the possibility of peace.

And then, children begin to disappear. And soon, Jane sees her own pain reflected in all the parents in the town. She wonders if she will be able to live through the aching loss, the fear all around her. But as the disappearances continue, she begins to see that what her neighbors are wondering is if it is Jane herself who has unleashed the horror of loss.

Half Moon Bay is a chilling story about a mother haunted by her past. As Stewart O’Nan said about Turn of Mind—this novel “blindfolds the reader and spins her around.”