It is rare to find a novel with a hook so ingenious that the book immediately becomes a must-read, but that is exactly what Steve Cavanagh achieved with his newest novel, Th1rt3en. The novel is a legal thriller with the tag line: “The serial killer isn’t on trial, he’s on the jury.” How could a true lover of crime fiction resist?

Fortunately, the payoff more than meets the expectations of that concept. Th1rt3en is the fourth novel in Steve Cavanagh’s series featuring con-artist-turned-lawyer Eddie Flynn. That said, this novel works just as well as a stand-alone so readers with limited time need not stress over being confused by any convoluted back-story. 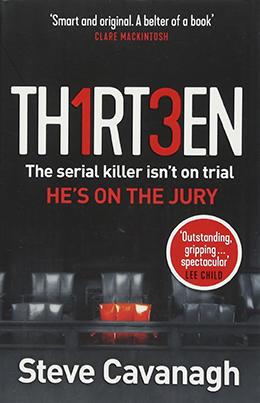 As the novel opens, Eddie Flynn is asked to be a consultant for the defense team working the hottest, cultural touchstone case of the moment – rising Hollywood star, Bobby Solomon, is accused of murdering his wife and her lover in a violent rage as they sleep in the marital bed. Along with Eddie, the lead lawyer has hired a jury consultant to weigh in on the selection of those individuals.

What they don’t know is that Joshua Kane is hell-bent on being part of that jury. And he will kill to make that happen – over and over again. Why Kane is doing this remains an open query for readers throughout most of the novel. This is one of many factors that will keep readers turning the pages rapidly, wanting all the answers and yet afraid of them at the same time.

The sections detailing the trial from jury selection to closing arguments play out in standard legal thriller format. Each side has an agenda and readers watch as they stealthily work to wrong-foot their opponents. But those developments are occasionally interrupted with tales of Kane’s exploits – first to get onto the jury and then later to sway the mindset of his fellow civil servants. 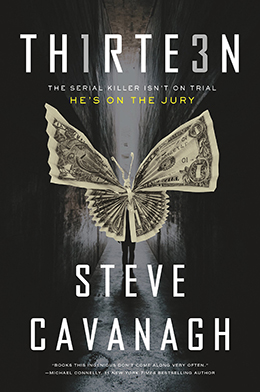 Eventually, the current case dovetails with an open FBI investigation and things become that much more complicated. The unique calling card of a killer – a dollar bill folded origami-style into the shape of a butterfly might hold all the necessary information needed to seal Bobby Solomon’s fate.

Steve Cavanagh deploys a familiar moment of reader manipulation late in the novel, but does so with such skill that even readers looking for it will likely fall right into his skillfully-placed trap. It is no surprise that some of the strongest advocates for this novel have been fellow writers, as the crafting of this breakneck plot is about as near-perfect as one is likely to find in a thriller.

Fans of Steve Cavanagh’s previous books will witness some developments in Eddie’s marriage, but again, enough background is provided to keep new readers up to speed on his personal life situation. That said, Th1rt3en is sure to generate a ton of new fans who will be following Eddie along into the future as the final moment of this novel feature a very minor cliffhanger that is intriguing enough to make readers hungry for the next novel now.