Under My Skin – The BOLO Books Review

Under My Skin is Lisa Unger’s contribution to the current renaissance of psychological suspense novels lead by unreliable narrators. As with any influx of releases within a hot, of-the-moment sub-genre, the quality of writing varies across the board, but fans of Lisa Unger would be correct in assuming that hers is one of the finest examples of this now-familiar trope. Newcomers to Unger’s work will find Under My Skin a perfect launching point to further explore the oeuvre of this vastly under-appreciated star of the crime fiction world.

One thing that sets Under My Skin apart is that whereas so often in these unreliable narrator tales, the protagonist is difficult to like because of the bad choices they continually make, Lisa Unger avoids that over-used motif by making Poppy Lang a relatable and sympathetic heroine. Only the hardest hearts among readers will be able to resist feeling empathy for this woman navigating life during its most difficult and stressful moments.

However, make no mistake about it, Poppy Lang is a mess. Her husband, Jack, was killed in a seemingly random attack while jogging through Riverside Park. After being cleared as a suspect, Poppy experienced an extended period of time when she vanished – no one knows where she was and probably because of the recent trauma, Poppy cannot remember a thing about that time either. Now she is seeing a psychologist to help with her mental state, but she still relies too heavily on medication to help with sleep and the general functioning needed for day-to-day life. It certainly doesn’t make matters better when she begins mixing both the prescribed drugs with other types she finds or is given and then downs them all with copious amounts of alcohol. 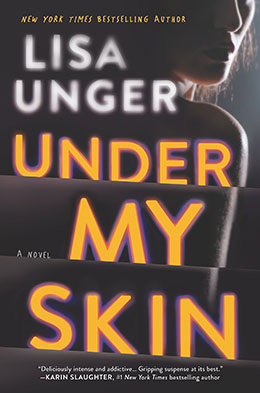 This leads to blackouts – more periods of time where Poppy is unclear what is real and what is a dream (nightmare, is more like it). She finds herself waking up with strange men with only the vaguest recollection of how the time progressed. Poppy is convinced that there is a hooded figure following her around New York. Even talking with the detective in charge of her husband’s case can’t ease the paranoia that pervades her every moment – waking, sleeping, and that odd and disorienting state in-between the two.

Lisa Unger wisely provides Poppy with a career that could ultimately help her. As a photographer, Poppy has a keen eye for detail, notices things within her environment that others may overlook, and even has a knack for distilling an individual’s personality with only the briefest glimpse. Unfortunately, her current mindset has her questioning her own skills at every turn. But what she can do is use photos to help her negotiate the differences between real life and the drug-induced, sleep-deprived hallucinations.

Fans of this sub-genre know that as the pages fly by, the reader – and Poppy – are getting closer to the truth of what happened to Jack and those missing days in Poppy’s life. Fans of Lisa Unger will expect that solution to be difficult to predict. Both are correct. With Under My Skin, Lisa Unger has given readers a satisfying journey into a mind shattered by trauma and the healing power of time and understanding.

Buy Links: Under My Skin by Lisa Unger