There are some excellent books coming out this week, but before I get to them, I want to remind my US followers – if you haven’t already – please get out there and vote tomorrow. Now more than ever, we need to hear every single voice. Every! Single! Voice!

After you have done that, reward yourself with one of these great books. 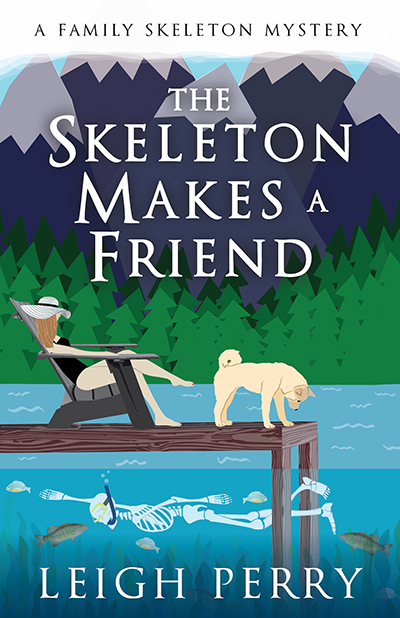 It is no secret that i am a huge fan of the Family Skeleton Series – I have posted cover reveals and reviews for years now. And I will have a launch day review of this one tomorrow. (Want to know a little secret? I *loved* it.)

Georgia Thackery is feeling pretty good about her summer job teaching at prestigious Overfeld College, and she’s renting a rustic cabin right by a lake for herself, her daughter, Madison, and her best friend, Sid the Skeleton. Together again, the trio are enjoying the quiet when a teenager named Jen shows up looking for her friend. Georgia doesn’t recognize the name, but she learns that the person Jen was looking for is actually Sid.

Sid reveals that he and Jen are part of a regular online gaming group that formed locally, and one of their members has gone missing. Sid admits that he might have bragged about his investigative prowess, enough so that Jen wants him to find their missing player. Given that Sid doesn’t have many friends offline―none, really, unless you count the Thackery family―Georgia agrees to help him search. They manage to discreetly enlist Jen, who lives in town, and follow the clues to… a dead buddy.

Now they’ve got a killer on their hands. Probing the life of Sid’s friend, they realize a lot is wrong both on campus and in the seemingly quaint town, and someone doesn’t want them looking deeper. 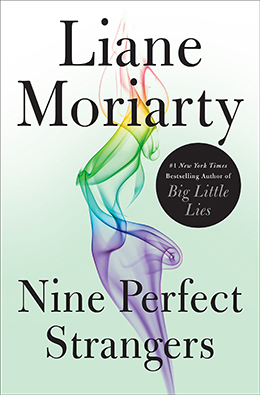 Nine Strangers and Ten Days. In the hands of Liane Moriarty, this is a recipe for a compulsively-readable thriller in which every life will be forever altered. This is Moriarty’s first official release since the massive success of the HBO adaptation of Big Little Lies – so expect this one to fly off the shelves.

Could ten days at a health resort really change you forever? In Liane Moriarty’s latest page-turner, nine perfect strangers are about to find out…

Nine people gather at a remote health resort. Some are here to lose weight, some are here to get a reboot on life, some are here for reasons they can’t even admit to themselves. Amidst all of the luxury and pampering, the mindfulness and meditation, they know these ten days might involve some real work. But none of them could imagine just how challenging the next ten days are going to be.

Frances Welty, the formerly best-selling romantic novelist, arrives at Tranquillum House nursing a bad back, a broken heart, and an exquisitely painful paper cut. She’s immediately intrigued by her fellow guests. Most of them don’t look to be in need of a health resort at all. But the person that intrigues her most is the strange and charismatic owner/director of Tranquillum House. Could this person really have the answers Frances didn’t even know she was seeking? Should Frances put aside her doubts and immerse herself in everything Tranquillum House has to offer – or should she run while she still can?

It’s not long before every guest at Tranquillum House is asking exactly the same question.

Combining all of the hallmarks that have made her writing a go-to for anyone looking for wickedly smart, page-turning fiction that will make you laugh and gasp, Liane Moriarty’s Nine Perfect Strangers once again shows why she is a master of her craft. 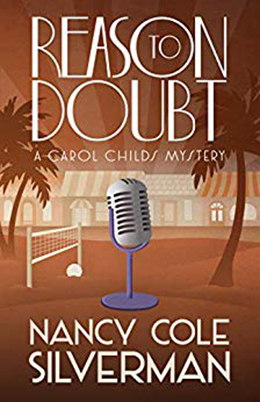 Nancy Cole Silverman once again places her investigative radio reporter heroine, Carol Childs, right in the middle of a criminal investigation. But this time out, the stakes are more personal than ever. The relationship between Carol and her daughter take center stage when a serial killer case rocks Los Angeles – and both Carol’s work and home life. With an informant that she can’t reveal and a personal connection to the accused, Carol must use every skill in her repertoire to navigate this case without losing everything she has worked so hard for. Silverman’s characters shine within this tightly-plotted novel.

Carol Childs is in the middle of one of the biggest stories of her life. Her daughter Cate has returned from college with a boyfriend in tow. A photographer who police suspect to be The Model Slayer, responsible for the murder of three young women.

Not since the Hillside Strangler has Los Angeles been so on edge.

And when the police arrest Cate’s boyfriend, Carol’s personal life and professional worlds collide. A tattooed cocktail waitress calls the radio station and asks to speak with Carol off the record. She knows the true identity of the real Model Slayer because she says she killed him.

Tensions mount as the clock ticks. The police are convinced they have the right man. Mother and daughter aren’t talking. Carol can’t reveal to investigators all she knows, and unless Carol can find the real killer before the trial begins, an innocent man may spend the rest of his life in prison or be executed for a crime he didn’t commit. 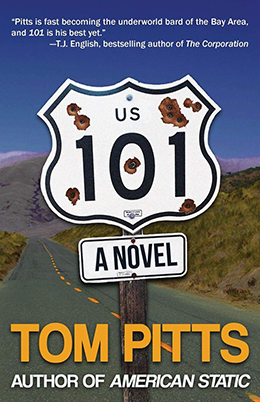 Advance buzz on this one is extremely encouraging. Tom Pitts’ brand of Noir is completely his own – dark and irreverent but always steeped in timely real-life situations. Expect lots of violence but also some knowing winks at society’s ills and more than a few laughs ease the tension. (Vlad the Inhaler? Come on, that is genius!)

On the cusp of pot legalization in California, Jerry runs afoul of some San Francisco bikers in the marijuana game. He flees straight up Highway 101 to Humboldt County to hide out deep in the hills at Vic’s, a reclusive pot farmer and old pal of his tough-as-nails mother. But trouble finds Jerry no matter where he goes and soon the bikers, a pair of stone killers, and a Russian weed tycoon named Vlad the Inhaler are all hot on Jerry’s trail.

Fallout from the unfolding chaos piques the interest of SFPD detective, Roland Mackie, when he learns Jerry’s host, Vic, is somehow involved. It opens a twenty-year-old wound, an unsolved case called the Fulton Street Massacre, and Mackie is willing to do whatever it takes to get a pair of cuffs on the elusive Vic.

When Jerry and his protectors are chased off the mountain and back down the 101 to an inevitable showdown back in the Bay, he learns Vic is much more than his host, he’s a mentor, his mother’s hero, and the toughest man he’s ever met.

With an unforgettable cast of characters and an action-packed plot, 101 is a wild ride through Northern California’s “emerald triangle.”