It’s December and the holiday season is upon us. Please don’t let yourself get too stressed during this time of year. Take a few moments out for yourself, perhaps by reading one of these books that are available this week. 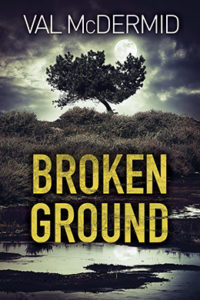 Val McDermid is a legend. Period. Fans of her Karen Pirie series know to expect a deep-dive into the past with this historical crimes division. Broken Ground is the strongest book in this series yet with some of McDermid’s most evocative writing, a wonderfully executed plot, and those characters that we have all come to love.

Six feet under in a Highland peat bog lies Alice Somerville’s inheritance, buried by her grandfather at the end of World War II. But when Alice finally uncovers it, she finds an unwanted surprise―a body with a bullet hole between the eyes. Meanwhile, DCI Pirie is called in to unravel a case where nothing is quite as it seems. And as she gets closer to the truth, it becomes clear that not everyone shares her desire for justice. Or even the idea of what justice is.

An engrossing, twisty thriller, Broken Ground reaffirms Val McDermid’s place as one of the best crime writers of her generation. 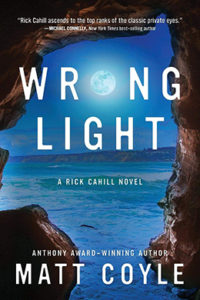 Matt Coyle’s PI series continues to become more noir with each new entry. Wrong Light, the fifth, is one of the strongest in the series. Those following along will know that Rick has his issues and his debt to the Russian Mob is about to come to the forefront. Coyle excels at weaving dual storylines together in seamless ways and his depiction of the San Diego setting is a refreshing change from the standard California locales.

Naomi Hendrix’s sexy voice hovering over the radio waves isn’t the only thing haunting the Southern California nights. A demented soul is stalking Naomi, hiding in the shadows of the night, waiting for the right moment to snatch her and fulfill a twisted fantasy.

When Naomi’s radio station hires PI Rick Cahill to protect Naomi and track down the stalker, he discovers that Naomi is hiding secrets about her past that could help unmask the man. However, before Rick can extract the truth from Naomi, he is thrust into a missing person’s case—an abduction he may have unwittingly caused. The investigating detective questions Rick’s motives for getting involved and pressures him to stop meddling.

While Rick pursues Naomi’s stalker and battles the police, evil ricochets from his own past and embroils Rick in a race to find the truth about an old nemesis. Is settling the score worth losing everything? 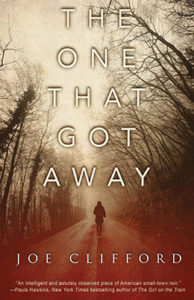 Joe Clifford’s strength has always been in crafting complex characters that readers truly care about, so it is no surprise that this trend carries on into his first stand-alone psychological suspense novel. This is an author who writes with pin-point accuracy never elaborating on things unnecessarily, but always managing to get to the core of his characters and ripping out the heart of his readers. This new direction into psychological suspense is sure to bring countless new fans to the Church of Clifford.

In the early 2000s, a string of abductions rocked the small upstate town of Reine, New York. Only one girl survived: Alex Salerno. The killer, Ken Parsons, was sent away. Life returned to normal. No more girls would have to die. Until another one did.

It’s been twelve years since Kira Shanks was reported missing and presumed dead. Alex Salerno has been living in New York City, piecemealing paychecks to earn a livable wage, trying to forget those three days locked underground and her affair with Sean Riley, the married detective who rescued her. When Noah Lee, hometown reporter with a journalistic pedigree, requests an interview, Alex returns to Reine and Riley, reopening old wounds. What begins as a Q&A for a newspaper article soon turns into an opportunity for money, closure and—justice. The disappearance of Kira Shanks has long been hung on Benny Brudzienski, a hulking man-child who is currently a brain-addled guest at the Galloway State Mental Hospital. But after Alex reconnects with ex-classmates and frenemies, doubts are cast on that guilt. Alex is drawn into a dangerous game of show and tell in an insular town where everyone has a secret to hide. And as more details emerge about the night Kira Shanks went missing, Alex discovers there are some willing to kill to protect the horrific truth.

In the modern vein of Dark Places and Mystic River, The One That Got Away is a dark, psychological thriller featuring a compelling, conflicted heroine and a page-turning narrative that races toward its final, shocking conclusion.