In The Blood – BOLO Books Review

The Hallows is a small community located in upstate New York.  It is also once again the setting for the latest Lisa Unger novel, In the Blood.  Unlike most series, Unger has chosen this fictional setting as the link between her books, and although some characters (such as Jones Cooper) do appear in each of the books, they really are more like interconnected stand-alone novels.

In the Blood is the story of Lana Granger.  She is a college senior with a troubled past.  Sacred Heart College in The Hallows has become a place of refuge for her.  Here she is able to forget the traumas of the past, including the death of her mother and the imprisonment of her father, and focus on herself and her future. 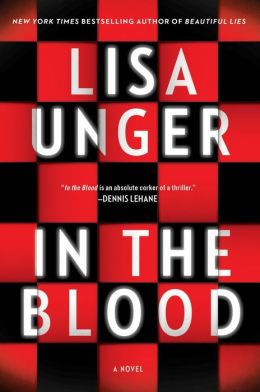 In The Blood by Lisa Unger

When her advisor encourages her to take on a babysitting position for a developmentally difficult young boy named Luke, she has no idea that the choice will lead her on a troubling journey.  Luke excels at manipulating the adults in his life and Lana quickly finds herself in over her head.

At the same time, police are investigating the disappearance of Beck, one of Lana’s closest friends.  Since this is not the first time one of Lana’s friends has gone missing, police are convinced that she is withholding vital leads.  For her part, Lana is being as honest as she can, but could she be deluding herself as well as the police.

Interspersed between these two storylines are diary entries, in which a mother documents the odd behavior exhibited by her young son.  As the novel progresses, these diary entries recount ever increasing sociopathic outbursts and the various efforts to help the boy learn proper social interaction techniques.

In what could have become a convoluted mess, Unger skillfully engineers each storyline to advance not just their individual plot points, but also to intertwine the plots together and cement their place in the novel as a whole.

This is easily Lisa Unger most complex novel yet as she examines the lives of troubled youth and the effects their treatment – both medically and socially – can have on their long-term development.  The old adage of nature versus nurture can be discarded as readers realize that it is often the combination of these two forces that determine who we are as humans.  Readers will have much to think about after finishing this book.

In the Blood features of number of clever twists, but it is not a book that relies on those twists to wield its power.  I will confess to having figured out the largest twist in this novel very early on, but it is to Unger credit that the eventual reveal lost none of the poignancy even with this foreknowledge.  These are characters for which the reader truly cares, so any of that artificial tweaking is not necessary for the desired effect to feel authentic.  That said, if you don’t figure this twist out, you will marvel at the way Unger has laid the clues for you and then covered them so you didn’t even notice.  These are the signs of a gifted author working within her element.

If you have not yet read a Lisa Unger novel, there is no better place than In the Blood to start.  But you had better clear your calendar first, since you won’t be able to stop with just one book.