Dystopian landscapes continue to dominate the young adult thriller genre.  With the success of books like The Hunger Games, Divergent, and The Testing, it is no surprise that many authors are attempting to tap into that existing audience.  The latest to succeed is Lindsay Cummings with her debut novel, The Murder Complex.

The future world that Lindsay Cummings creates is stark and violent.  Rather than spell out the world-building aspect of her novel in exposition-heavy background, Cummings allows the reader to garner small tidbits of what exactly happened in the past (and frankly, what exactly is happening in the present).  It is left up to the reader to puzzle these pieces together to create a vision of this post-apocalyptic landscape.

The narrative is built around two alternating points of view.  The two focal characters are Meadow Woodson and Zephyr James.  These two teenagers seem to be at cross purposes until dangerous events cause them to jointly confront the Initiative – the governing institution overseeing this new reality.

Meadow was trained by her father from a young age to be able to protect herself and her family by whatever means is necessary.  After the tragic loss of her mother, Meadow focused herself on this training and has had to prove herself capable on more than one occasion.  Zephyr, on the other hand, was programmed by the Initiative to be a killer.  Why exactly he is killing these folks is a mystery for readers to learn as they get further into the story, but what is immediately clear is that Zephyr feels bad about doing these things that seem to be out of his control. 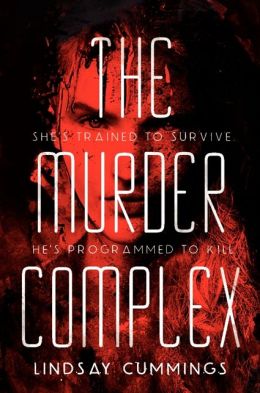 The Murder Complex by
Lindsay Cummings

When Zephyr’s killer instinct targets Meadow, readers will grip the book just a bit tighter as they struggle to divide their loyalties between two characters they have come to care about.  Lindsay Cummings easily differentiates the voices of these two teens, so that by the time they clash, readers can easily identify with both.  This makes the stakes of their mission higher and more rewarding for the reader.  While occasionally the secondary characters seem more like clichés filling out their role in the larger story, these two leads continue to defy expectations.

As with most dystopian tales, The Murder Complex requires that readers learn a new language.  In a world with Wards, Leeches, Pirates, Gravers and more, there is great potential for confusion, however Cummings manages to introduce each of these concepts in such a way as to orient the reader within this unfamiliar social structure and ultimately get them invested in the outcome.

Since The Murder Complex is the first in a series, the final resolution remains elusive; but Lindsay Cummings does a good job of giving closure to this section of Meadow and Zephyr’s journey.  Cummings does however also end the tale on a cliffhanger, so if that is something you are not a fan of – don’t say I didn’t warn you.