When Maggie Barbieri’s Once Upon a Lie first appeared, readers did not know what to expect. Here was a dark, contemporary thriller from an author best known for her light-hearted cozy mystery series. All doubts vanished once the novel was read however. And now, the second book in the Maeve Conlon series, Lies That Bind, has been released and it is even better than the first.

Lies That Bind is first and foremost about family – not just the family of birth, but the family we choose. There are many examples of familial relationships within the novel. Readers with strong friendships will see much of themselves in the relationship between Maeve and her best friend Jo. Interactions between Maeve and her two teenage daughters play out completely realistically throughout the book. Even the dynamics within the family of Maeve’s childhood neighbors (and sworn enemies) reinforces this theme.

Readers are bombarded with this idea of family right from the start. Just moments after the novel begins, Maeve Conlon finds out that her beloved father has passed away. It is during the funeral activities that Maeve first hears that she might have had a sister who was sent away to an asylum for the mentally handicapped. Could it be true? Would Maeve’s father have kept something so significant from her for all of these years? 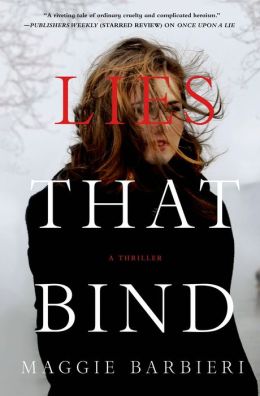 Lies That Bind by Maggie Barbieri

What follows is a meandering (although, never aimless or slow-moving) plot in which Maeve attempts to find out if she did – or does – actually have a sister. Each of the clues she possesses leads her to another destination and at each stop the small details from the past begin to coalesce into a larger truth.

Woven into this main storyline are several smaller developments in Maeve’s life.  Maeve finally begins a romantic relationship – speed bumps and all. An insurance check from her father’s estate mysteriously goes missing only be replaced with cash in the same amount. And let’s not forget that Jo is nearing the delivery date of her longed-for child. To say that Maeve has her hands full would be an understatement.

Fans of the bakery high-jinks which permeated Once Upon a Lie will miss those comic moments in Lies That Bind, but the bakery is still a frequent location for discussions between Maeve and Jo. Since Lies That Bind takes place around the holidays, this allows Maeve to close up shop temporarily – thereby facilitating more free time for her to play detective.

Part of the draw of a series is that readers begin to feel at home with the characters.  These people are so endearing that readers will immediately feel as though they are part of the family. With that said, if Lies That Bind teaches us anything, it is that the bonds of family are the strongest kind. Fans will be eager to return to the series landscape and spend some more time with the Conlon family when the third book in the series appears in the future.

The BOLO Books review of Once Upon A Lie

Disclaimer:  An print galley of this title was provided to BOLO Books by the author. No review was promised and the above is an unbiased review of the novel.