The authors in the new Lawrence Block-edited anthology, Dark City Lights: New York Stories, were tasked with writing short stories set in New York City. The resulting stories are as diverse as the city itself. These stories represent everything from gritty to gentrified, from dark to lighthearted, from contemporary to historical, from crime to sci-fi and much in between.

Block wisely chose to organize the stories alphabetically by title and this sampling of mini reviews covers the entire collection – one from early in the table of contents, one from the middle, and one from the end. However, what is more important is the career stage of my selections. As representation of the wide variety of writers within the collection, these reviews represent a writer at the beginning of her writing career, one who is an emerging force in the genre, and one who is an established brand. And no review of this collection would be complete with out a mention of the legend himself, Lawrence Block. 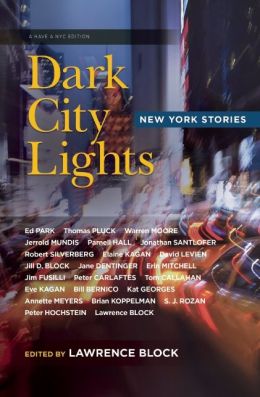 First up is Erin Mitchell’s story, Old Hands. In her first published short story, Mitchell nails the tone and voice needed for her slightly off-kilter character – an unnamed nurse who has left the profession after actions she took resulted in the death of a patient. When a former colleague stumbles upon her sitting in Central Park, he decides to encourage her to follow her passion by returning to the profession she was clearly born for. The shorter length only serves to intensify the ultimate effect of this story, which hardly goes where one would expect.

Next we have The Big Snip by Thomas Pluck. This story is a seamless blend of dark humor and serious social commentary. In it, readers follow a team of veterinarians who spay and neuter the cities massive population of stray animals. Told in gritty and realistic details, the occasional moments of humor – such as the fact that they call their mobile operating room The Neuter Scooter – provide much-needed relief from an otherwise tense and graphic story. Readers will anticipate where this story is going to lead, but a last-minute zig-zag will likely surprise.

The last story in this mini survey of the collection is by S.J. Rozan. Wet Dog on a Rainy Day is an extremely short, but powerful story. The style is reminiscent of a stream-of-consciousness narrative. In it, a woman named Anna recounts in her mind her feelings regarding a recent breakup. As the fog of sleep burns off and Anna’s mind begins to sharpen, her specifics of the breakup become increasingly detailed. Rozan manages to elicit sympathy for Anna, even while the reader’s loyalty is constantly shifting.

Since he was the editor of the collection, Lawrence Block is to be commended for culling together such a varied group of writers and stories. Lawrence Block’s contribution, Keller The Dogkiller, is a reprint of a story featuring his much-loved assassin anti-hero. Reading Block automatically makes you feel smarter. Even in his “lighter” writings – of which this story is a prime example – Lawrence Block never talks down to his readers. For example, in this story, two of the dogs are named after famous poets – Percy Bysshe Shelley and Rainer Maria Rilke. Tiny things like this will resonate with some readers and likely send others to the Internet to find a reference point. Basically, the story deals with Keller being hired to assassinate a vicious pit bull, but as so often happens for Keller, things go horrible wrong very quickly. The number of bodies present by the end of the story reflect both how efficient Keller is at his job and how good Lawrence Block is at his.

Dark City Lights: New York Stories is an entertaining short story collection highlighting the many facets of New York City life. This is the perfect book to have on your shelf, ready for reading when you just need a momentary diversion.

Disclaimer: A print galley of this title was provided to BOLO Books by one of the authors. No review was promised and the above is an unbiased review of the novel.