There are currently over twenty books in Peter Robinson’s Inspector Banks mystery series – with more on the way. The critical and fan reception of these novels increases with each new title. Later this month, Robinson releases an e-only short story featuring Banks. While Summer Rain lacks (by necessity) the depth of the novels, it will easily please fans of both the author and his signature character.

Summer Rain is a quick, but enjoyable read. In this story, Inspector Banks and his colleague Susan Gay are asked to investigate a crime from the past. This in itself wouldn’t seem odd except for the fact that the man asking them to look into this case also claims to be the reincarnated soul of the victim. 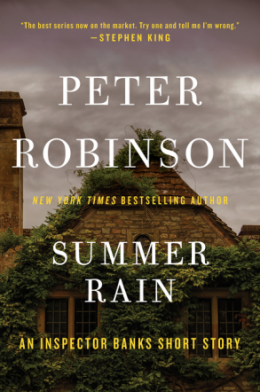 Mr. Jerry Singer asserts that he has never previously been to North Yorkshire, but now that he is here, he is experiencing past-life déjà vu. He is convinced that he was a hippie who was murdered some thirty years prior and he wants Inspector Banks to solve his murder.

Not expecting much, but wanting to pass the time, Banks questions some of the townsfolk only to become troubled when he hears a tale of a young man who fell to his death down a flight of stairs. While the story doesn’t exactly match Singer’s timeline, there are enough similarities to encourage the Inspector to dig deeper. Even Banks can’t anticipate where this trail will end.

Peter Robinson fans will delight in this quick visit featuring Inspector Alan Banks. The wet summer season makes for an interesting setting in which to set this possibly-paranormal story. Even the ever-present music Banks loves so much adds to the mystical ambiance within Summer Rain. If you are fan of this series, don’t miss this enjoyable morsel.