The Killing Kind is Chris Holm’s debut with Mulholland Books. It is a movement away from the paranormal milieu of his previous series with Angry Robot. This novel is decidedly noir in nature and a perfect fit for Holm’s gritty writing style.

The novel’s protagonist, Mike Hendricks, is the ultimate anti-hero. Mike is a hitman, but since he only targets other hitmen, readers can root for him with a clear conscience. In many ways, he is the typical “bad boy” and readers will feel bonded to him from the moment he stalks onto the page. His missions are at once dangerous, deadly, and strangely exotic. 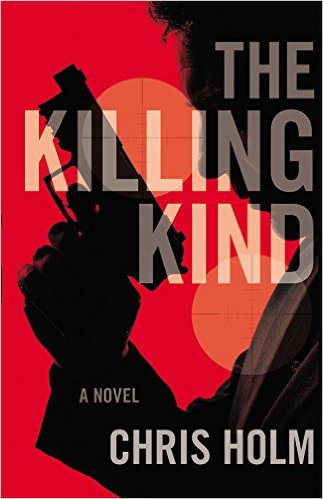 One lengthy vignette near the middle of the book involves an assignment within a casino. Readers will be reminded of Ocean’s Eleven with the intricacy of the plan; but the unflinching nature of the novel helps to bring realism to the proceedings. Holm is not afraid to use familiar tropes but he always manages to give them new life with his original deviations.

It is no accident that this comparison is with the film world. The plotting in The Killing Kind has a cinematic feel to it – with the action traversing from one location to the next in rapid succession. Insiders will note that many of the locations in the book correspond with cities that hosted Bouchercon, the World Mystery Convention. Locations such as St. Louis, Long Beach, Cleveland, and Albany are all represented.

It is, however, the writing that is the true star in The Killing Kind. The pacing of the novel is near perfect with a gradual build to the midway point and then a cannonball of narrative straight through to the conclusion. Chris Holm has a knack for creating metaphors which seem fresh and original while also being instantly obvious. In just a few lines, Holm can create a character out of whole cloth or set the location for an extended action sequence. Take for example this quote from very early in the Chapter One:

“Miami was beautiful, sure, but that beauty was as garish and artificial as the siliconed women who walked its streets.”

Even an anti-hero needs a nemesis and Chris Holm does not let readers down. Like a classic James Bond villain, Engelmann is pure evil, but still manages to avoid becoming a caricature. The enmity between Hendricks and Engelmann is the fuel that sets The Killing Kind ablaze. Throw in the FBI who are also hot on their trail and you have the makings of a classic chase thriller.

Mike Hendricks also gets a complex backstory. His wife thinks he died during a military operation in Afghanistan. Mike thinks it best to allow her to believe this since his current “occupation” comes with unusual stress and risk. Unfortunately for Mike, this decision may come back to haunt him. Chris Holm clearly has great respect for our military and the plight of returned veterans.

The Killing Kind is a fast-paced, adrenaline-fueled novel marking a turning point in the career of Chris Holm. Where he was once a cult author with a loyal fan base, this new novel will no doubt make him a recognizable and leading name in the thriller genre moving forward. It is ironic that The Killing Kind features two rival hitmen since the novel itself is a guaranteed “hit.”