With the release of Trail of Echoes, her third Lou Norton mystery, Rachel Howzell Hall has solidified her ranking as one of the strongest new voices in crime fiction today. Each new book in the series has seen her already well-rounded characters exposing more subtleties and nuances, which serves to make them that much more realistic. And let us not forget her setting of Los Angeles. There is certainly no shortage of authors working that stomping ground, and yet Rachel Howzell Hall has managed to stake a claim on the area by tapping into the often-unexplored diversity found there and by giving voice to those individuals who have long been stifled.

When the body of a girl is discovered on a trail in Bonner Park, Elouise Norton and her partner Colin Taggert have no idea their investigation is going to lead to a series of abductions and killings involving young black girls from the area. When the family notification of that first case takes Lou to her childhood neighborhood, she is forced to reconcile her current life with the journey it took to get her there. And she is forced to confront the biases that impede justice in cases involving those that are perceived as less fortunate. 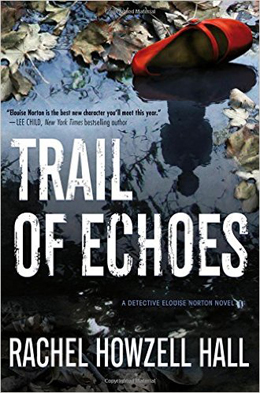 The titular trail of echoes calls to mind the actual trail on which the first girl’s body is discovered, but even more than that, it becomes a metaphor for the path Lou Norton has taken throughout her life. The case takes her back to where it all began for her and those memories reverberate and demand examination. Not making that process any easier is the fact that her estranged father has recently showed up at her doorstep wanting to provide excuses for his abandonment.

Lou’s personal life is also at a crossroads. Now that she is divorced, she is finding it ever harder to make time to foster her relationship with new beau, Sam; her ex-husband keeps calling on the pretense of settling some legal matters; and then there is the handsome doctor who keeps texting her asking for a date. When it rains it pours, but the life of a police officer is not always conducive to fostering relationships.

This new serial killer case allows Rachel Howzell Hall to touch on many controversial topics afflicting society today. Everything from mean girls filming fights to Mexican gangs staking claim to new territory play into the investigation. When one of the members of the police force comes out as gay, his fellow officers react in varied, but realistic, ways. It is a credit to Rachel Howzell Hall and the character of Lou Norton herself, that through it all Lou remains a beacon of hope – devoid of cynicism or judgment. These are the traits that we as a society want in our law officers. Lou is not perfect, but she always strives to be better.

Fans of police procedurals and those who want more diversity in their reading experiences should check out Rachel Howzell Hall’s series. The ending of Trail of Echoes portends of a tough road ahead for Elouise Norton, but you can bet readers will be there to cheer her on.