This year has seen a plethora of outstanding short story anthologies. Already this year, BOLO Books has covered Echoes of Sherlock Holmes, Blood On the Bayou, and Storm Warning – with a few others still to come, including today’s choice.

Sunshine Noir is edited by Annamaria Alfieri and Michael Stanley and contains a very strong collection of stories tied together by the warmer climate and temperatures of their various settings. Probably because of the dark and ominous nature of the genre, noir has often been viewed as the domain of less tropical locations, but this collection proves that heat and humidity can certainly lead to mayhem and murder. 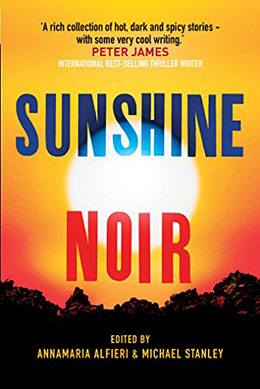 After a brief, but informative and teasing introduction by Peter Rozovksy, Sunshine Noir presents seventeen stories guaranteed to keep you reading while turning up the air-conditioning. Here are some brief reviews of just a sampling of the great stuff between these covers.

A domestic suspense gem in which a women named Marie returns to her childhood home in Singapore in the hopes of convincing her aging father not to move overseas. An evil step-mother, a strange man in the guest room, and a loyal domestic servant all factor into this spell-binding story. Foreshadowing abounds and Yu knows just when to make the big reveals to elicit maximum impact.

This one is a story of revenge. Myers writes of an unsuccessful author who is teaching creative writing at a local college. When one of his students – a habitually abused woman – reacts negatively to his vicious critiques, all bets are off and only one of them will survive the dangers of the Arizona desert. Myers crafts her characters so well that readers will find themselves physically reacting to some of their actions – both hissing and cheering at different times.

Greg Herren sets his story in his hometown of New Orleans. Housecleaning features an unnamed narrator – mainly because he has had so many names he can’t remember which is the real one – who reflects back on his mother, her choices, and their life on the run. Herren skillfully paints a word portrait of a cynical, yet realistic, man who inherited more than just a love of cleaning from his flawed mother.

Toni is a part-time private eye specializing in locating and returning stolen property throughout the Greek Isles. Getting mixed up in a missing jewelry case exposed Toni and his friends to some unsavory types. The surprising twists and turns in this story will have readers wishing Toni were a series character. They might also be booking the next flight to Greece.

Constable Ixau is the head of the police force in Botswana. When a local man is killed, many in the area believe that spirits are to blame; but Ixau knows of the man’s infatuation with the most beautiful girl in the village, so he fears that one of her other suitors may be guilty of more than just lust. This is a well-crafted story that plays superstition against human nature – with the African heat as the catalyst.

The Man in the Prampram by Kwei Quartey

Patrik Blom has been in Ghana hiding from his past crimes when his brother informs him that their mother is ill and likely on her deathbed. Will he get to visit her in Sweden before the police – or worse, a vengeful assassin – catch up to him? Quartey keeps readers glued to the pages with excellent pacing and effective use of time shifts.

When You Wish upon a Star by Colin Cotterill

Thailand is the setting for this story featuring the lead character from one of Cotterill’s existing series. When an unusual car crash catches the eye of reporter Jimm Juree, she thinks the word accident my not apply. Logical examination of the facts leads to a surprising, yet realistic, conclusion to this enjoyable story.

Crack the spine on this volume; there are plenty of other wonderful stories in Sunshine Noir. As we head into the winter months, perhaps this collection is just what readers need to help to keep them warm. And no doubt, this will lead some of them to the other works by the seventeen skilled crime fiction writers included in this anthology.