When I heard that the Fleet Science Center in San Diego was opening an exhibit called Sherlock Holmes and the Clocktower Mystery, I knew that I wanted coverage of it here on BOLO Books.

So I reached out to my good friend Erin Labonte-McKay and asked her if she had plans to attend. She did! And we are lucky enough to have her thoughts on this unique museum exhibit here on the blog today. 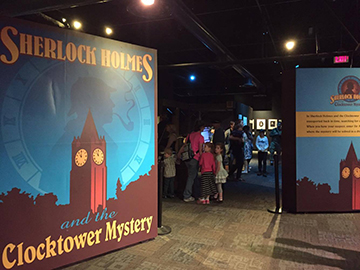 To begin, on the day of my visit, it was Free for County Residents Day at the Science Center, so the place was bursting with schoolchildren with varying degrees of interest. Also, I fully intended to go through the exhibit with my (actual) detective husband or my well-read mother, but circumstances conspired so that I ended up going through alone. As such, I missed a few things the first go-around – like the crime scene. Oops! I recommend going through with a Watson, to keep you on your toes.

As you enter the exhibit, you first collect a worksheet, to fill in with your own notes and clues and suspects as you go. (You probably don’t need this, but it’s a nice gesture.) There is also a sign suggesting that you give yourself 45 minutes to go through the exhibit, and a warning about timed consultations that doesn’t make sense until the end. 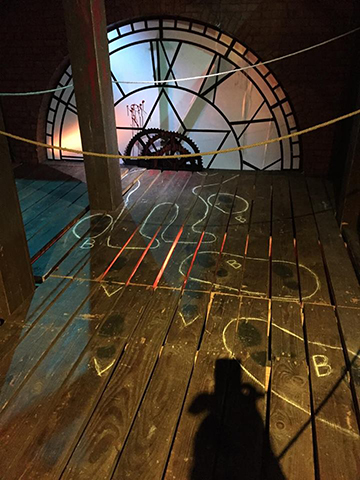 Tucked around a corner is a desk and some information about Arthur Conan Doyle billed as an Introduction. Unfortunately, due to the layout of the exhibit at the start, this area isn’t the first thing you see and doesn’t appear relevant to The Case (this is incorrect), and so visitors mostly skimmed right past. I did too, except to note that about half of the information was about his interest in spiritualism and séances, his belief in fairies, and how much he enjoyed disguises. The rest of the story is told in 8 chapters, each consisting of a life-sized vignette, a wall-sized explanatory “page”, and a breakdown of the clues presented. Several chapters featured audio (helpfully scripted in the clues section), and two featured scents as well. Everything was fairly dark and shadowy, to great effect. 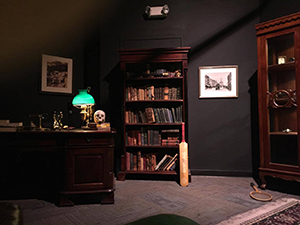 I started the exhibit feeling a bit overwhelmed by the visuals and not quite sure how to proceed, but by chapter three (one suspect’s rented room) I’d caught on. I even felt quite clever as I spotted the clay key impression left on the window table. The trick, obviously, is to go slow and read everything – even the Cheats – and not take yourself too seriously. 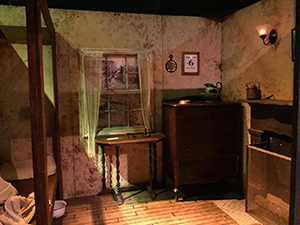 The entire exhibit is really a love letter to the stories of Sherlock Holmes. The Clocktower Mystery is not complicated, but features several of our favorite Sherlockian tropes. The story begins with a dead body in a clock tower, identified as Sherlock Holmes but removed to the morgue before Watson – our ever-faithful guide – arrives at the scene. Inspectors Lestrade and Gregson are unavailable, but as we go, Watson keeps asking “What would Sherlock do next?” and so all proceeds as it should. The tale takes us from the clock tower to a sideshow to a séance, and ends in an opium den, dropping clues and gloomy atmosphere all along the way. 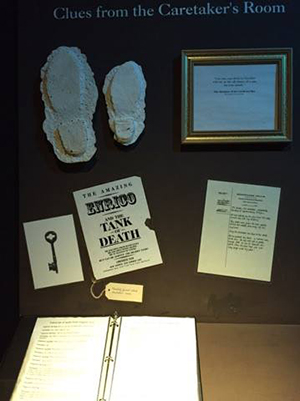 At the end of Chapter Eight we are asked whether we need to go around again, or whether we think we know the answer. If you think you know the answer, you are directed to stand near an unassuming black door and wait for it to open. (Yes, really.) There is one final Cheat Clue next to this door, which reads – in extremely small lettering, so that a magnifying glass is provided – “You surely do not expect to be given another clue at this stage do you?” I am sorely tempted to tell you what was on the other side of this door, but I will not. I was sworn to secrecy!

I highly recommend visiting this exhibit, if you get the chance. It will be in San Diego through June 4. Don’t get your hopes up for swag, though – they had exactly two mugs and two shirts, and the only item worth your time is the shirt that says “I solved the Clocktower Mystery” – But it’s only available in toddler sizes.

Thanks Erin! It sounds like so much fun. Like myself, I am sure that many reading this wish that they were able to experience this event in person, but for those of us who can’t be there, it is nice to have a sense of what is was all about.

For those close enough to San Diego for a visit, this seems like a worth-while exhibit.