Malice Domestic is the yearly crime fiction convention held in/near Bethesda, Maryland. About half the size of Bouchercon, Malice Domestic is a cozier affair – in all definitions of the word. Since Malice celebrates the traditional mystery, there are a fair number of cozy mystery authors in attendance, but it is important to remember that it really does include all sub-genres that fall under the larger “traditional” banner. Here is a brief remembrance of this year’s convention.

I arrived in Bethesda on Thursday after a long drive from Nashville, Tennessee. Wait, you might be saying. Don’t you live in Maryland, Kristopher? Of course I do, but I planned a lovely vacation with my family just prior to Malice Domestic, so that meant I had to endure this long commute before my “con”-ing could commence. Believe me, it was worth it!

Thursday night was highlighted with a lovely dinner with Canadian author Cathy Ace. It is always wonderful to catch up with Cathy and the food (and drink) at Mon Ami Gabi was delicious. We dined al fresco, which afforded us the opportunity to encounter some other Canadian authors who were passing by on the way to their meals. Cathy and I chatted about the state of the industry, the upcoming Bouchercon in Toronto, and countless other topics. Cathy did reveal to me that she is working on publishing a collection of short stories this year that will include the “origin stories” for both of her current series – the Cait Morgan books and those featuring the WISE Investigation Agency ladies. We finished dinner with just enough time to stop in at pre-registration to pick up our badges and bookbags – one less thing to do in the morning. By that point, I was exhausted and we parted ways.

Friday morning started with the traditional stop at the registration desk so that I could say hi to the always-busy Shawn Reilly Simmons. One has to grab your moments with her when you can because she does so much behind the scenes to keep the Malice Domestic weekend running smoothly. Others that I stopped to see at the registration desk throughout the weekend included Tonya Spratt-Williams (and her delightful Mother). Tonya was proudly displaying her BOLO Books lapel pin, so you know that she received a giant hug! 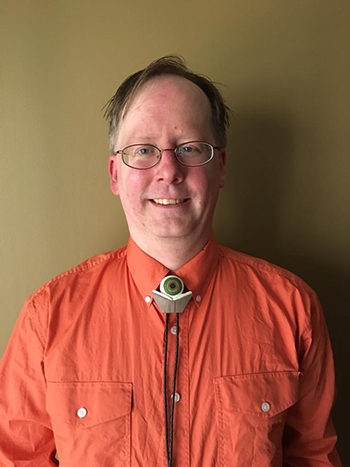 Then it was off to Malice-Go-Round. For those that don’t know, this is a marathon event where a huge amount of authors circle around tables telling readers about their latest books. Since my work here at BOLO Books requires that most of these books are already on my radar, I use this as an opportunity to get a sense of the personality of authors I don’t yet know and to say hi to those authors I do. Malice-Go-Round is always a fun, but exhausting start to the weekend.

Any plans to make it to other panels that day – and believe me, I did have those plans on the schedule – were thwarted as I ran into countless friends in the halls of the convention hotel. Stopping to say hi, quickly turns into a hour long conversation before running into the next friend. That is the beauty of Malice! As luck would have it, I ran into newly-awarded Raven winner Dru Ann Love – as she and her road trip cohorts – Terri Bischoff and Catriona McPherson – had just arrived. I also spent some time catching up with Joanna Campbell Slan and Linda Gordon Hengerer.

I did make it to the opening ceremonies after which Michael and I grabbed dinner with Judy Clemens and Claire Booth. It was the perfect, relaxing way to end the day. We dined at Jaleo – a tapas-style restaurant not far from the hotel. You can bet that with that group, lots of laughter was involved. After that, Michael and I had to head off to a concert, so I missed most of the late night con activities (including the anthology signing). So much to do, so little time.

Saturday started with the Midnight Ink book signing. After helping a bit to get the tables and such organized for this, it was great to grab a few books and to be able to cheer on Kellye Garrett at her first official Malice Domestic event. Her book, Hollywood Homicide, is one of my favorites of the year-to-date (don’t miss it in August).

From there, you could find me sitting in on 3/4 of the panel that Dru Ann moderated. She had the crowd in stitches (while also showing off that Raven Award) and I would have loved to stay for the whole thing, but I needed to get myself into the zone for my first moderation assignment for Malice Domestic. Of course, I’ve done this before for Bouchercon, but this was my Malice “debut.” The panel was called Group Dynamics: Sharing Detection. My job was easy since I only had to allow Cathy Ace, Arlene Kay, Anthony Perona (one half of the writing team that publishes under the name Elizabeth Perona), and Loretta Ross to wax poetic about their novels. Afterwards, I received some lovely comments from panelists and audience members, so I am pretty sure all went well. When you are in the zone for something like that, it can be hard to judge how things were received. All in all, I think everyone came away pleased.

Malice Domestic does their signings a bit differently than Bouchercon. Twice a day they have a large group of authors who had their panels earlier gather in the signing area to meet their fans. Needless to say, I went to all of these signings. 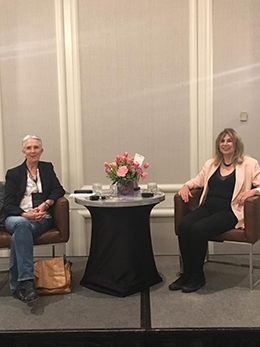 I also attended both the interview with Lifetime Award recipient, Charlaine Harris (conducted by Margaret Maron) and the Guest of Honor interview with Elaine Viets (conducted by Ann Cleeves). I have been a huge fan of both of these women for years, so it was a blessing to be able to help them celebrate these deserving milestones. And those interviewers are stars in their own right. These interviews had the audience laughing throughout. I should give a shout-out here to Marcia Talley who did a wonderful job as this year’s Toastmaster.

Saturday ended with the Agatha Award Banquet. Judy Clemens graciously invited me to sit at the table she was hosting in honor of her nomination in the YA category (for Tag, You’re Dead written under the name J C Lane). The other tablemates and I enjoyed a tasty dinner, a delicious dessert, and the presentation of the Agatha Awards. It is always nice to be able to cheer on your favorites and congratulate the winners. This year, I was especially pleased to see awards going to Cynthia Kuhn (Best First), Art Taylor (Best Short Story), Catriona McPherson (Best Historical), Jane K. Cleland (Best Non-Fiction), Penny Warner (Best YA), and Louise Penny – who was no in attendance (Best Novel). 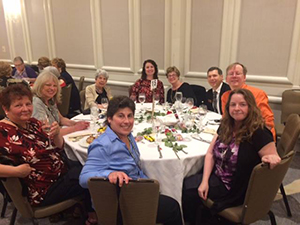 On Sunday I started with morning by attending a panel on British Empire Mysteries. Christine Trent was a great moderator and the three panelists: Sujata Massey, Jeri Westerson, and Annamaria Alfieri intrigued the audience with their answers – not an easy task at 9AM on Sunday. This was followed by the journalism panel which I attended specifically to see Christina Kovac (in her Malice debut), LynDee Walker, a Malice new-discovery for me, Radha Vastal. This panel did not disappoint.

By this point, the weekend’s activities and the prior vacation were catching up with me, so I decided that it was the wise decision to head home. I did get to say good-bye to many of my favorite folks on my way to the door – as Dru Ann joked, my looooong trip to the door.

So, Malice Domestic 2017 was a grand success! Next year brings a new hotel and an incredible roster of Guests of Honor (Louise Penny, Nancy Pickard, Catriona McPherson, David Suchet, Janet Blizard, and Robin Hathaway). I hope to see you there!