Readers would be justified in thinking that with a title like Lockdown, the new Laurie R. King novel was going to present a thriller about a school under siege; and in a way, that is exactly what is provided – though hardly via the expected method.

It is career day at Guadalupe Middle School. It should be a day when the students examine what the future holds for them, but instead the tensions that lie just under the surface of this societal microcosm threaten to erupt.

Lockdown is a true ensemble piece. Laurie R. King puts into place a collection of characters with enough secrets, scandals, suspicion, and lies to keep readers guessing throughout the unfolding of this tragic incident. There is such diversity presented on the page – a true reflection of the melting pot that is America – and each character is vividly drawn. 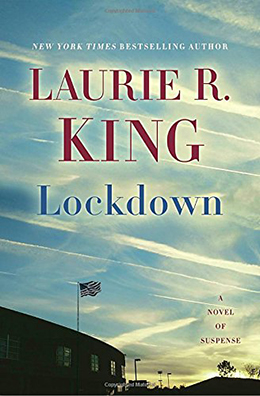 Laurie R. King structures her novel by starting chapters with time-stamps documenting the days activities from multiple points of view in a steady movement forward. Readers know immediately that this is a device used as a virtual countdown clock to impending trouble. Occasionally, King will recount past events that have a bearing on the current plot. Among other things, these include details of a student’s death the previous year, the principal’s time spent in Papua New Guinea, and a controversial trial that is taking place across town.

About two-thirds of the way through Lockdown, Laurie R. King presents a series of chapters that are inspired by the opening line of the principal’s career day lecture. The leader of the school starts out by alluding to the school population as a tapestry of unique threads. This leads to each of our ensemble cast reflecting on what that phrase means in relation to themselves. It is beautifully executed and had it ended there, it would have been a highlight of the novel – but Laurie R. King goes even one step further. At the end of this section, the school principal modifies her metaphor in a way that takes it from stuffy and erudite to gritty and modern. The shift is not forced and seems so obvious after the fact, but when it happens, the moment is extremely powerful and marks a decided shift in the nature of the narrative. This short collection of chapters alone is a master class on unifying a narrative and the characters involved while also exposing the more global aspects of a theme.

The violent incident towards which the entirety of Lockdown is leading does not occur until very late in the novel. This reinforces the idea that the dénouement, while an important part of the work as a whole, is not as important as the “why” that causes it. Incremental actions leading to massive reactions is something we are seeing more and more of in today’s modern world and by recounting this in a small, enclosed environment, Laurie R. King is able to document the dangers involved in such decisions.

The brevity of the violence in Lockdown may surprise some, but it is clear from the novel’s structure that this was not Laurie R. King’s focus. If I have one complaint about the novel, it would be that the lack of bloodshed seems unrealistic given what we have seen occur in similar real-life situations. But this is not a book about the attack; this is a novel about people, about society, and about interaction. As such, longtime fans of Laurie R. King will delight in the brief appearance of Kate Martinelli and Brother Erasmus – beloved characters from her earliest series. They are only a tiny part of Lockdown, but their arrival helps to expand the canvas of the novel, reinforcing the idea that this type of thing can happen anywhere, at any time.

Laurie R. King’s Lockdown is a timely novel, meticulously written, and sure to have readers thinking long after the story is told.