With just this first issue, Black Cat Mystery Magazine has laid a solid claim as the newest location for quality short crime fiction. Featuring both new and reprint stories, John Gregory Betancourt and Carla Coupe have opened their arms to embrace the short story community and readers are going to find much to enjoy within this issue and those to follow.

As I always do with collections, i am just going to look at a sampling of the content within. Presented here in the order they appear within the magazine are some brief thoughts on a few of the included stories. 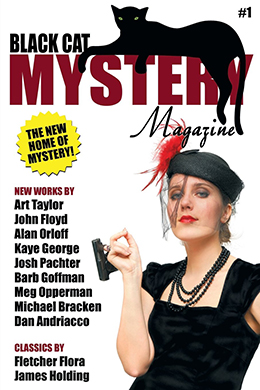 GETTING AWAY by Alan Orloff

Alan Orloff’s story is the tale of travel agent, Lloyd Birnbaum, who provides some special documents for his unusual clients – criminals looking to go into hiding. Like many day jobs, this particular one takes its toll on the low man doing the grunt work – at least until retirement looms on the horizon. This one is impossible to read without relating to the main character’s work frustration, even if his methods of dealing with it are a bit sketchy.

Art Taylor skillfully weaves classic fairy tales into a gritty, contemporary story of an elderly neighborhood man concerned as he watches his environs change over time. As with most fairy tales and fables, the outsider is someone to distrust – but what if one’s views are tainted by experience? The story’s conclusion reminds us that rarely does real life have the pat answers and platitudes found at the end of those childhood tales.

Barb Goffman takes what sounds like a cozy title and goes to a very dark place indeed. The story of a writer who notices that unusual things are happening around her home, but has no real evidence that anything at all is out of the norm. Is she losing her mind or is something else going on in this bungalow? This one is not for the faint of heart.

A PIE TO DIE FOR by Meg Opperman

Cooking Thanksgiving dinner has never been more stressful. Annabelle wants to impress her cantankerous mother-in-law with the best pumpkin pie she can make, but a previous engagement her husband knows nothing about is distracting her. Can she find a way to successfully complete both tasks? This is a fun story that hardly goes where one might expect.

DON’T BANK ON IT by Jack Halliday

This is a brief story, well told. During a routine transaction, Howie is struck by the beauty of the new bank teller. Hardly able to believe that she is flirting with him, Howie enjoys the moment for what it is – unaware that in just a few weeks time he’ll be look at everything through a very different lens.

FLIGHT TO THE FLIRTY FLAMINGO by Kaye George

Phineas runs the local strip club. While he is the boss, he is also a friend and counselor to his “girls.” Jodie Vive is his newest dancer, but she comes with some heavy baggage. Kaye George keeps readers engaged as these two characters attempt to navigate their complex relationship in the business of the shady underworld. Kaye George here plays with stereotypes of both strippers and their employers.

THE ABC’S OF MURDER by Josh Pachter

This is a poem connecting each letter of the alphabet to a crime related term (or terms). Some turns of phrase are downright clever and the ultimate payoff is unexpected, yet satisfying. This one is probably best read in the print edition of the magazine as the layout of the poem is important to the reading flow.