The Widows of Malabar Hill – The BOLO Books Review

Sujata Massey burst on the crime fiction landscape in 1997 with her award-winning debut, The Salaryman’s Wife. This was followed by several more critically-acclaimed novels in the Rei Shimura mystery series. In 2013, Massey took a brief detour to explore India’s past in two historical works, the second of which – India Gray – included a short story featuring a new character, Perveen Mistry. Now, with The Widows of Malabar Hill, Sujata Massey blends these two styles together to launch a new historical mystery series featuring that one-of-a-kind heroine.

Perveen Mistry is a fictional character based on a real life ground-breaking woman. As such, Sujata Massey places Perveen in the role of the first female lawyer in India. Set in the 1920’s Bombay this historical novel reverberates through modern readers during a time when we are re-evaluating the treatment of women within our own time. To witness what Perveen is able to accomplish in the past is both astonishing and entertaining. 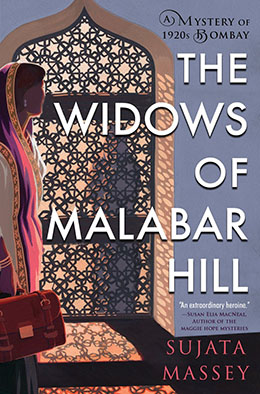 In The Widows of Malabar Hill, Perveen Mistry discerns some odd details in the will of a recently deceased Muslim named Omar Farid. This wealthy man practiced the historically-accurate custom of polygamy – thereby leaving behind three very different widows. Perveen notices that each of these women has agreed to give up their inheritance to charity, even though it represents all they have to survive on.

Sujata Massey uses this premise to literally take readers behind the curtain of purdah – a tradition in which women live in total seclusion from the outside world. Massey’s research into historical India is fascinating and adds authenticity and ambiance to this compelling mystery. Often in historical mysteries, one or the other – the history or the mystery – seem to take precedence and likely represent where the author’s true interest lie, but in The Widows of Malabar Hill, the two are inseparable and are treated as true equal components in the plot’s evolution.

Meanwhile, Perveen is also dealing with the reemergence of a figure from her own past. Exploration into her relationship with this man becomes just as interesting as the main mystery at hand. By populating the backstory and background of this novel with such fascinating folk, Massey ensures that readers will become invested in this series for the long haul. Perveen’s best friend, a lesbian girl who happens to be staying with her highly-respected political parents on Malabar Hill is certain to become a fan favorite.

This is the start of a series that is sure to find many loyal devotees. With a look at the diversity of a culture rarely explored in crime fiction, Sujata Massey manages to make the past feel contemporary without losing any of the critical historical highlights. With time, Perveen Mistry (notice how the name sounds like “mystery”) is sure to educate readers on the many complexities inherent within Indian society. Start now with The Widows of Malabar Hill and follow this talented author and fascinating character into uncharted territory.

Buy Links: The Widows of Malabar Hill by Sujata Massey