We are headed into Independence Day here in the States, which means that summer reading will be at an all time high.  There are some new books to keep your eye out for throughout the week. 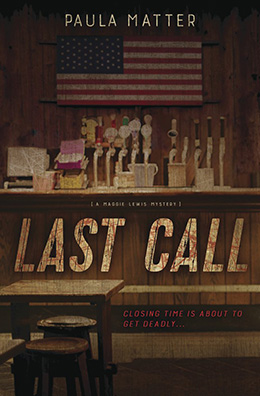 Working-class heroine, Maggie Lewis, makes for a great addition to the genre’s history of non-traditional crime fiction protagonists. Paula Matter has crafted a character who is gritty, no-nonsense, and downright lovable – flaws and all. In a time when the question of what makes us American is at the forefront of everyone’s mind, Matter’s Florida citizens come alive with vitality and variety. The novel’s plot unfolds in a realistic way, weaving the elements of trouble and humor together effectively. Jump on board now, I think it will be a while before Maggie Lewis’ “last call.”

On a bad day at work, bartender Maggie Lewis would love to kill a customer or two. On a very bad day, she’s accused of doing just that.

Suspended from her job at a Florida VFW after being set up for the murder of Korean war veteran Jack Hoffman, Maggie has no intention of letting herself be framed. And since the police have yet to arrest anybody for the last major crime in town―the murder of Maggie’s husband―she’s sure they won’t try too hard this time, either. So Maggie must produce enough evidence to clear her name, get her job back, and find the killer before she ends up behind the wrong kind of bars. All in a day’s work for a bartender who can’t hold her beer, her tongue, or her temper. 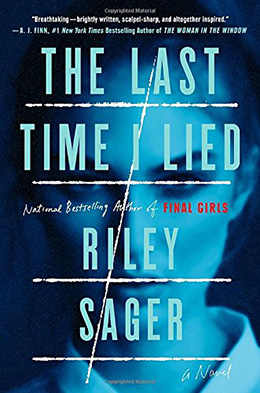 Riley Sager returns with his second crime novel. The sleepaway camp once again harkens to Sager love of horror movie tropes. Readers will know instantly that returning to the site of a childhood trauma can’t possibly be a good idea, but Emma does it anyway. The dual timeline narrative works effectively here, with the clues and the risk in the present day feeling increasingly important and dangerous.

Two Truths and a Lie. The girls played it all the time in their cabin at Camp Nightingale. Vivian, Natalie, Allison, and first-time camper Emma Davis, the youngest of the group. But the games ended the night Emma sleepily watched the others sneak out of the cabin into the darkness. The last she–or anyone–saw of them was Vivian closing the cabin door behind her, hushing Emma with a finger pressed to her lips.

Now a rising star in the New York art scene, Emma turns her past into paintings–massive canvases filled with dark leaves and gnarled branches that cover ghostly shapes in white dresses. When the paintings catch the attention of Francesca Harris-White, the wealthy owner of Camp Nightingale, she implores Emma to return to the newly reopened camp as a painting instructor. Seeing an opportunity to find out what really happened to her friends all those years ago, Emma agrees.

Familiar faces, unchanged cabins, and the same dark lake haunt Nightingale, even though the camp is opening its doors for the first time since the disappearances. Emma is even assigned to the same cabin she slept in as a teenager, but soon discovers a security camera–the only one on the property–pointed directly at its door. Then cryptic clues that Vivian left behind about the camp’s twisted origins begin surfacing. As she digs deeper, Emma finds herself sorting through lies from the past while facing mysterious threats in the present. And the closer she gets to the truth about Camp Nightingale and what really happened to those girls, the more she realizes that closure could come at a deadly price. 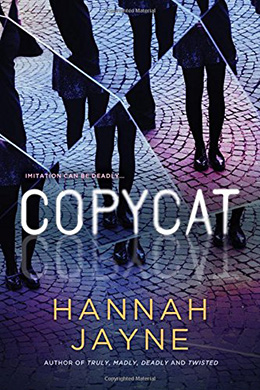 Readers who love novels with authors and books at the center will find much to enjoy here. The blurring of the lines between fact and fiction generates some true stand-out moments of dread.

Everyone is dying to read the latest book in the popular Gap Lake mystery series, and Addison is no exception. As the novels biggest fan, she’s thrilled when the infamously reclusive author, R.J. Rosen, contacts her, giving her inside information others would kill for.

Addison’s always dreamed of what it would be like if the books were real…But then she finds the most popular girl in school dead. Murdered. And realizes that life imitating fiction is more dangerous that she could have imagined. As other terrifying events from the books start happening around her, Addison has to figure out how to write her own ending―and survive the story.