Carter Blake finds people – that is what he does; but in many ways, it is also who he is on the deepest level. Having such purpose makes the challenges of life bearable and the rewards that accompany success are undeniably fulfilling. So when his latest case – in Presumed Dead – finds him hunting down the last victim of a notorious serial killer, Carter discovers his entire world-view turned upside-down.

Presumed Dead is the fifth book in Mason Cross’s thriller series. Fans who have followed Carter Blake on his previous investigations will delight in visiting with an old friend, but this novel works equally well for new readers.

David Conner is traveling when he sees his sister, Adeline, through the bus window. By the time he can get to her, she has vanished into the crowd. No so unusual, except that Adeline was supposedly murdered years ago – the final victim of the Devil Mountain Killer. Through mutual contacts, David reaches out to Carter Blake, begging him to look for his sister. 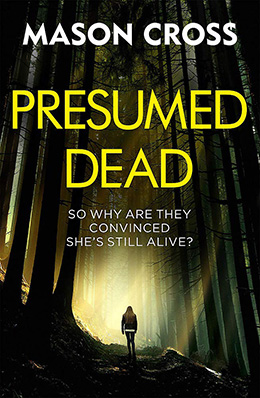 With that set-up, Carter finds himself in Bethany, Georgia. At first, Carter thinks he is just appeasing the delusions of this eccentric loner – a brother who never got over the loss of his beloved sibling – but when Carter finds out that the previous investigator hired by David is now dead, he begins to wonder if there might be some validity to this sighting. This brings Carter into the crosshairs of the local sheriff’s department and it quickly becomes clear that this town does not want to revisit the source of its infamous notoriety.

Determined to follow his client’s claims through to whatever end result develops, Carter teams up with Deputy Isabella Green. At first, Green – whose father was involved in the original investigation – is reluctant to dig up past memories, but the more she and Carter follow the trail of clues, the more convinced everyone is that the truth of what happened years ago is still disrupting lives throughout Bethany today.

Even though Carter doesn’t call himself a private investigator – he much prefers the term locating consultant – he does employ standard methods of investigation as he works through cases. With the multiple viewpoints, Mason Cross outlines the logical flow of that information while using the shifting focus to increase tension and suspicion.

The resolution of Presumed Dead is a true stunner, eliciting a “holy shit” from this reader. But unlike some twists that appear totally contrived, this development is organic to the novel, so the emotions generated are rewards for the reader and deserve kudos for the author who laid such complex groundwork. Crime fiction fans who have not yet met Carter Blake should certainly rectify that as soon as possible. Mason Cross has crafted a modern-day hero – flaws and all – and fans will happily follow him to any destination.

Mason Cross will be part of the panel I am moderating at the upcoming Bouchercon convention in St. Petersburg, Florida.  If you are attending, please join us for a discussion of crime fiction thrillers.

Disclaimer: This review is based on the audio-book version of this title.