What We’ve Lost is Nothing –
BOLO Books Review

The Chicago suburb of Oak Park, Illinois is most immediately associated with the presence of Frank Lloyd Wright designed homes and Ernest Hemingway’s birthplace, but it was also a community which strived for racial integration during the turbulent 70’s.  The effects of this demographic initiative fuels much of Rachel Louise Snyder’s debut novel, What We’ve Lost is Nothing.

Snyder calls her fictionalized version of this initiative the Diversity Assurance Program and the central family in her novel is connected to it via the mother, Susan McPherson, who works for the housing committee.  It is her job to reassure the current residents about the value of owning a home in the neighborhood, as well as encouraging new families to consider relocating to this enclave.

Ilois Lane is located in the heart of Oak Park and seems like a pleasant enough place to live.  But one morning in April, everything on Ilois Lane changes forever.  Multiple houses on the block are subjected to home invasions and burglary.  Susan’s daughter, Mary Elizabeth and her best friend chose that day to skip school and this simple turn of events exacerbates an already volatile situation. 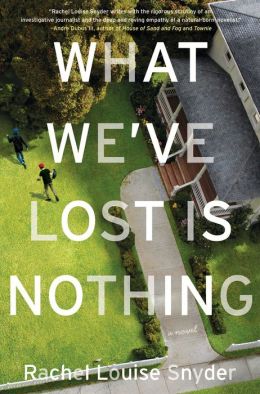 What We’ve Lost is Nothing by
Rachel Louise Snyder

As neighbors start to become suspicious of each other, many of their underlying prejudices and beliefs begin to rise to the surface.  What once was a community of solidarity quickly begins to crumble under doubts and distrust.

Snyder populates her canvas with unique families representing various viewpoints.  By allowing readers to see how each reacts to this extreme trauma, she illuminates universal problems which exist in all of our lives.  Will these neighbors allow years of effort designed to create racial and economic harmony to be destroyed, or will they fight to uphold the standards by which they know they should live their lives?

This is a novel in which the reader can feel the tension building with each turning page.  There is no doubt that this is going to end with an explosive episode, but what form that moment will take is always in flux.  Snyder keeps all the players in motion throughout and readers will delight in meeting this group of characters.

Some of them are fascinating, like Arthur Gardenia, who suffers from a rare eye defect that requires him to stay hidden indoors and hone is listening skills.  Some are mysterious, like Etienne Lenoir, the French chef full of secrets and lies.  And some, like the McPherson family, resemble you and I – simply trying to do right, but far from infallible.

Snyder makes the reader question whether it is ever possible to really know another person.  Even those closest to us may hide within them preconceived notions they long to suppress.  And maybe while we are busy judging others, we are failing to notice our own faults.  By placing her story within a microcosm of the larger society, Rachel Louise Snyder is able to extrapolate larger universals about human interaction while telling a tale that is full of unease and suspense.

What We’ve Lost is Nothing is a novel that is extremely readable, but which will also leave readers with much to think over and contemplate.  Book clubs will delight in the variety of topics covered, leading to rich discussion points for debate.  And most of all, readers will long to see what Rachel Louise Snyder is going to deliver as a follow-up.