All Day and A Night –
The BOLO Books Review

Alafair Burke is the type of writer who knows how to tap into the collective societal psyche and pluck out just the right hot-button topic around which to build a thrilling crime procedural.  She has done it time and time again and things are no different with her latest, All Day and A Night.  Recently alternating her work between stand-alones and series entries, All Day and A Night finds Burke once again placing her series protagonist, Ellie Hatcher, at the forefront.

The plot of All Day and A Night revolves around convicted serial killer Anthony Amaro.  After a new murder is committed that matches the modus operandi used by Amaro, his guilt in relation to the earlier crimes for which he was convicted is thrown into doubt.

Alafair Burke strategically puts into play two very different teams investigating Amaro’s guilt or innocence – for two very different reasons.  Ellie Hatcher is asked by her boyfriend (and lead prosecutor) to examine the earlier investigation to make sure there were no flaws in the case which lead to Amaro’s conviction and imprisonment.  With the help of her partner, J. J. Rogan, they begin to comb through every choice and decision made by the original investigative team in the hopes of clearing them of any corruption. 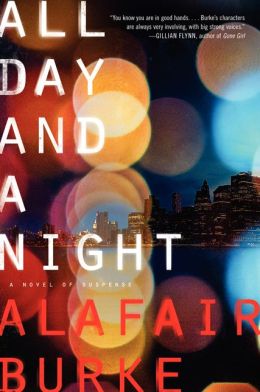 All Day and A Night
by Alafair Burke

Meanwhile, celebrity attorney Linda Moreland has assembled a team to help her prove that Anthony Amaro was wrongly convicted.  Her desire to free Amaro has as much to do with making a name for herself as it does with her desire to free an innocent man.  On her investigative team, she hires Carrie Blank, a lawyer with little experience on the criminal side of the courtroom, but who does just happen to be the sister of one of Amaro’s alleged victims.

Through these two opposing teams, Alafair Burke gives readers a true insider’s look at the world of crime investigation.  Burke not only details the steps that Ellie goes through to ensure that there were no mistakes made in the previous case against Amaro (which includes asking some difficult questions of well-respected colleagues), but she also highlights the type of details trial lawyers latch on to when trying to defend their client and their client’s interests.  Both of these tactics allow readers to intensively explore the procedures employed by the police during the original investigation.

As with any type of crime series, the novel also further develops the series characters.  In this case, readers see how Ellie struggles with her new situation of cohabitating with her boyfriend and Rogan’s adamance that it is wrong to second guess the professional work of others.  While these developments are important and interesting, the core strength of the novel rests with the conflicting goals of the two investigative teams, as they explore the past.

Most readers would assume that any book that is even partially based on the controversial Innocence Project and that groups efforts on behalf of prisoners would be fairly predictable, but if those readers are fans of Alafair Burke, they will have long known that Burke rarely takes the standard path with her writing.  As such, just as with her previous novels, All Day and A Night follows a twisted path all its own.

Disclaimer:  A finished copy of this title was obtained by BOLO Books at the 2014 Book Expo America conference (courtesy of the author and publisher).  No review was promised and the above is an unbiased review of the novel.

Historical Post of Interest: Review of If You Were Here by Alafair Burke