The Competition –
The BOLO Books Review

In her latest novel, The Competition, Marcia Clark confronts the current crisis involving school shootings head-on.  While touching on all the most controversial aspects of these investigations, Clark still manages to avoid any sensationalism.  The Competition is an example of the investigative procedural at its best, yet never fails to deliver on the suspense front as well. 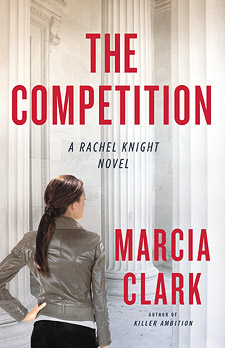 The Competition by
Marcia Clark

As with the previous titles in the series, The Competition presents its action through the eyes of Rachel Knight, prosecutor for Los Angeles Special Trials, DA’s office.  Fans of the series will expect that her cohorts in crime prevention are not far away; and they would certainly be correct.  In this novel, Detective Bailey Keller takes the “second chair,” but Toni LaCollier also makes a few well-timed cameos.  Meanwhile, feeding them information from the Robbery-Homicide Division is Rachel’s boyfriend Graden Hales.

Just after the front cover of the book is cracked open, the reader is thrust into the midst of the aforementioned school shooting.  A rampage is happening at Fairmont High School, located in a suburb in the San Fernando Valley.  Marcia Clark does a fine job of recreating the mass confusion and hysteria associated with such events.  This explosive and action-packed opening grabs reader’s attention, but it is what follows that will keep them turning the pages.  As the dust begins to settle on this horrific event, the true story rises to the surface.

Why did these two gunmen target this school?  Where did they get the guns?  Why did they commit suicide at the conclusion of their rampage?  And more importantly, are those two bodies the only guilty parties?

What follows is a detailed accounting of the investigation into this crime.  Marcia Clark knows how these investigations work and excels at showing the twists and turns a case can take as new leads open up avenues not previously considered.  It is a testament to her background that Clark is able to include some out-of-the-blue revelations during the questioning of suspects without it ever seeming contrived or unbelievable.

Since so much of the novel deals with why these shooters would hatch such a plan, Rachel and team also call in some help from two esteemed psychologists.  It is through their analysis that readers are given a true glimpse into the fractured minds of individuals who could potentially commit such heinous acts.  Things only get worse when it becomes obvious that these killers are in competition with those that came before – and they won’t go down until they are more “famous.”

As is her standard practice, Marcia Clark peppers her tale with local color details such as restaurants (Engine Co. No 28), hotels (The Biltmore), neighborhoods, and more – all of which makes the tale feel authentic.  Even with such a high-profile case, these characters have lives outside of their work, which is another detail that many crime fiction authors tend to forget.

Marcia Clark should be commended for tackling such a difficult topic without allowing any societal bias to sway her plot.  As so often happens in life, there are no easy answers.  It would be a disservice to readers if she purported to fully understand such complex moral issues.  This is not to imply that there is no resolution.  It just means that readers should not expect everything to be tied up in a perfect little bow.

The Competition is a book that will cause people to contemplate the topic of violence while they are reading about it and then continue to ruminate on it long after the last word is consumed.