Sandra Block’s debut novel, Little Black Lies, comes out today.  I am very excited to introduce you to Sandra and her novel with this interview.  Little Black Lies is a psychological suspense thriller featuring series character, Zoe Goldman. For the official cover description, you can see yesterday’s BOLO Post.  And look for the BOLO Books review of Little Black Lies tomorrow.

BOLO Books:  I am always fascinated by titles. Was Little Black Lies always the title or did you struggle to find the right moniker?

Sandra Block:  The title was a definite struggle! (I even wrote a blog post about it) http://www.sandraablock.com/blog/how-to-pick-a-bestselling-titleor-not

We went through quite a few, but when the editor suggested it, I really loved it. It fit the darkness of the story, as well as the theme. Plus, it’s catchy.

BOLO Books:  Zoe is a resident in psychiatry. As a practicing neurologist, I am sure that much of this was familiar to you, but how much time did you spend on research for the novel?

Sandra Block:  I didn’t really research at all. I spent my formative twenties as a resident, so I just plumbed my memories from that time. I’m a neurologist, but know enough psychiatry to at least fake it! 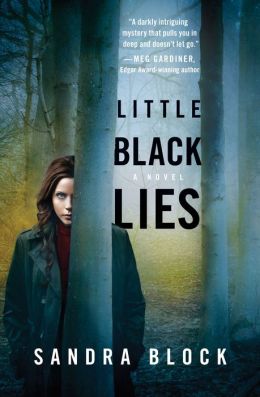 BOLO Books:  We have seen a rash of unreliable narrators in crime fiction of late. Zoe continues this new tradition. What is it about these types of narrators that appeal to writers and readers?

Sandra Block:  I don’t know if I’d call Zoe unreliable. I think her memory is unreliable due to the childhood trauma of losing her birth mother, and her main source of information is unreliable as well (as her mother has dementia). She is doing her best to be honest, but given the circumstances, she can’t help but be a bit unreliable.

BOLO Books:  Zoe’s mother is dealing with the onset of Alzheimer’s. Why did you elect to include this element within the story?

Sandra Block:  Part of this was to add to the murkiness of the situation. Is her adoptive mother not telling the truth about her birth mother’s death on purpose, or is due to her dementia? How much does she really not remember? Also, it helps explain why Zoe is back in Buffalo (from Yale), and gives some urgency and motivation to her issue of finding out about birth mother. Finally, it’s a struggle many people deal with, losing a parent to dementia. Because her mother has early-onset dementia, Zoe just has to deal with it earlier than most.

BOLO Books:  One of Zoe’s investigative techniques is to flip though old yearbooks. Do you ever look at your yearbooks or old pictures?

Sandra Block:  That’s funny. I used to. I used to look through old camp pictures, high school and then college. And I think I was looking for clues, as to who I really was in those times. Of course, ultimately those pictures are manufactured, and don’t relay very much information, except that we all change.

BOLO Books:  There are many puzzles and clues in the novel that can help lead readers to the ultimate outcome, but many of them only become obvious once the solution is known. How difficult was it to seamlessly imbed these into the storyline?

Sandra Block:  That was difficult. It was like a tightrope act – add enough clues so that a reader could go back and say “oh yeah!” but not so many as to give it away. One of my favorite parts about reading mysteries is that “oh my gosh!” moment when the truth is revealed, and I wanted to give that moment to the reader.

BOLO Books:  The novel is set between November and February. Why the winter season?

Sandra Block:  It’s Buffalo – of course it’s snowing! But, joking aside, I like to think of thrillers as glorified ghost stories. What better setting for a ghost story than a snowy, Buffalo winter?

BOLO Books:  Mental health remains one of the most difficult topics facing society. How can we help to remove the stigmas associated with the various diagnoses?

Sandra Block:  Part of my reason for giving Zoe Goldman ADHD, and having her be a psychiatrist as well as see a psychiatrist, was to remove that stigma, and help demystify mental illness. She often discusses these illnesses in objective, neurochemical terms.

Sandra Block:  Right now, I’m editing the next Zoe Goldman book, called “The Girl Without a Name,” about a young girl who comes into the hospital in catatonia, and the search for her identity.

Sandra Block:  Ooh, that’s a good one! I guess I’d say e-book, because I’m totally addicted to my iPad. But, I would miss the hard-cover, because I keep hard-covers as sort of totems to books I truly love.