John Kander is no stranger to musicalizing controversial topics. With Fred Ebb, he brought us Weimar Republic Germany set to music with Cabaret, the squalor of Latin American prisons as seen through the eyes of an idol-worshipping gay window dresser in Kiss of the Spider Woman, and the horrors of race relations in pre-Civil Rights-era America during The Scottsboro Boys trial. Now, with new collaborator Greg Pierce, he is bringing to life the aftermath of child abduction in the digital age. Kid Victory is having its world premiere at the Signature Theatre in Arlington, Virginia (the premiere is a co-production with The Vineyard Theatre in New York City).

Kid Victory tells the story of Luke, a teenager who is just returning home after being held captive for a year by a pedophile. In a wise move, the creators have elected to focus the story on Luke’s adjustment as he re-enters standard society after such a traumatic event. With that in mind, audience members should prepare themselves for a dark and disturbing evening of musical theater. This controversial subject matter is confronted head-on and no punches are pulled.

The creators have structured the show in such a way that the less horrific aspects of the storyline intermingle with the heavy and depressing flashback sequences. Luke’s assimilation back to normalcy was never going to be an easy process, but progress is hampered by his ultra-religious mother and distant father. Meanwhile, his high school sweetheart wants to rekindle their relationship and a well-intentioned therapist can’t seem to break through Luke’s invisible wall. 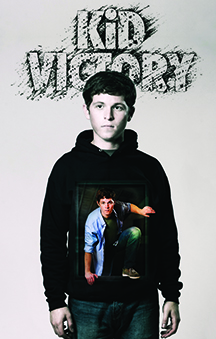 When Luke stumbles upon a help wanted sign in a local garden shop, he finds a kindred spirit in the proprietor, Emily. Emily is a hippie, free-thinker who brings some much-needed humor and hope to the overall show. As sung by Sarah Litzsinger, some of Emily’s songs have greater impact than the role really warrants.

Musically, Kid Victory is a bit eclectic in style, but many of the individual numbers really hit the mark. Fans of Kander’s work will no doubt recognize some of his trademark elements throughout. The use of a chorus of outsides is particularly effective in bringing out the various emotions necessary.

The future of the show will depend on the ability to cast both Luke and his abductor, Michael. The actor playing Luke needs to play both youthful naïvety, as well as isolated indifference, in equal degrees. In this production, Jake Winn manages both, although he reads a bit older than the character is intended to be. It is Michael who will be most difficult to cast. This is a character with almost no redeeming values and unlike most villains in musical theater, he really isn’t given a moment of true humanity. Jeffry Denman completely transforms in this production, so much so that it was difficult to clap for him at the curtain call. He is to be commended for taking on a role that most actors would shy away from.

In the Signature production, the stage is practically owned by Christiane Noll, as Luke’s Bible-thumping mother. Her character is not exactly likeable, but she is relatable. And of course, Noll is a first-class singer and provides the show its 11 ‘clock number with “The Last Thing He Needs,” her duet with Sarah Litzsinger. It’s worth mentioned that Kid Victory is just shy of two hours in length, with no intermission. This works to fully submerge the audience within the piece, but does not allow for much breathing room away from the horrific elements at its core.

Kid Victory is a show worth seeing as long as one enters the theater prepared for such heavy subject matter. This is not an easy show to watch and even though things end on a hopeful note, the trip home from the theater will find audiences still reeling from some of the more shocking and violent scenes. The show will however generate much discussion afterwards – with topics ranging from Internet access for kids to faith to therapy techniques. Kid Victory is a show that demands to be analyzed and dissected by its audience.