Let Me Die in His Footsteps – The BOLO Books Review

Lori Roy’s Let Me Die in His Footsteps is an unusual suspense tale filled with secrets, lies, truth and legend. It is basically an old-school Southern Gothic with a decidedly modern feel, which is ironic given that the tale is so steeped in history. Like most historical fiction, the basis of the story is real, but the true magic comes from the unknown journey the reader trusts the author to navigate successfully.

Let Me Die in His Footsteps is really two stories. One is set in 1952, starting on the evening Annie Holleran turns fifteen and a half. The other takes place in 1936, the year of the last lawful public hanging in Kentucky. It is the intertwining and juxtaposition of these two independent stories that creates this strange and odd novel. Navigating that path will keep readers up long into the night.

It starts on a particular evening in 1952 when Annie Holleran is about to experience the rite of passage all girls in her small rural town traverse. At midnight on the exact half-birthday between the fifteenth and sixteenth birthdays, each girl gazes down into a well and sees the face of the boy who will be her true love. Unique to the Holleran girls, this day also means the strengthening of the “know-how,” a type of psychic sixth sense which results in townsfolk being leery of the family. 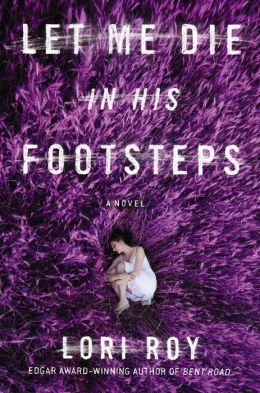 Let Me Die in His Footsteps
by Lori Roy

Regardless of a reader’s reaction to these supernatural elements – whether it is viewed as silly superstition or as a potential premonition – Lori Roy’s use of the preternatural in Let Me Die in His Footsteps instantly grabs the reader and compels them to read on with wonder and interest. But the narrative changes track almost immediately as reality collides with legend. The real world intrudes on this mystic ambiance when Annie stumbles upon a body on her way to the well. Another member of the Baine Family has died.

This is where Roy brings in the history of animosity which exists between the Holleran and Baine families, dating back to 1936. That was the year when Annie’s Aunt Juna made accusations against Joseph Carl Baine – claims which resulted in his public execution. It is clear that no one person knows all the details of what happened on that long-ago day and Lori Roy delights in slowly exposing the truth to her readers.

Since many of the characters appear in both time-periods and each character’s relationship to the others is critical, readers must pay attention in the beginning chapters or risk losing track of the plot strands later in the book. Lori Roy does an admirable job of distinguishing between the main players, but some of the seemingly secondary characters can become muddled.

The landscape of Kentucky and the ever-present scent of lavender are also unifying elements linking these two histories. Lori Roy’s sentences unspool like lazy summer afternoons – slow and familiar. While the plot does not expose itself at high speed, the reader’s need to know the answers to a myriad of questions keeps the pages turning and once the final revelations occur they seem at once both unexpected and inevitable.

Let Me Die in His Footsteps proves that Lori Roy is not afraid to take chances. As with her earlier novels, the superior quality of her writing is ever-present, but this time out the tale she has chosen to tell is wholly original and utterly unique. It is a Gothic family saga set in America’s heartland: it is the story of mothers and daughters, it is the story of sisters, and it is a story of how the sins of our past return to seek retribution.