The Shield and The Hangman – The BOLO Books Comic Reviews

Dark Circle Comics has done it again. With the release of The Shield #1, they have further demonstrated their commitment to making these older comic book characters accessible to modern readers. With a story by Adam Christopher and Chuck Wendig and art by Drew Johnson, The Shield fights for our freedom from the very first panel. 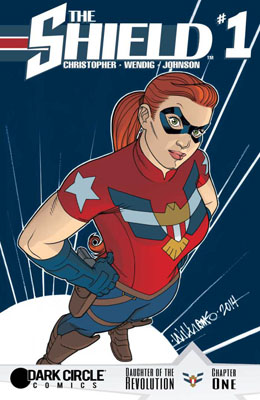 The prologue plays out much like a silent movie – virtually in images only – telling the story of The Shield’s patriotic efforts during the Revolutionary War. From there, we move to modern-day Washington, DC where a young woman suffering from amnesia is arrested. It is clear that several factions of the government want to talk with her, but with the help of a local policewoman, she is able to escape. While on the run, her memories begin to resurface and as she is piecing the unbelievable story together, she once again falls into the hands of her foes.

By making this version of The Shield female, the team behind the comic has made it even more relevant to our times. It appears as though she will be teaming up with this African-American policewoman as well, which adds even more diversity to a story that very much needs it. After all, if this is going to be a story about America and the battle for freedom, let it reflect that in all ways.

No doubt, The Shield will find a way out of her current predicament in Issue #2 of “Daughter of the Revolution,” coming soon. I’ll be there cheering her on.

At the opposite end of the spectrum is The Hangman #1, Dark Circle Comics first foray into a more supernatural storyline. Written by Frank Tieri and drawn by Felix Ruiz, The Hangman has a very different feel from the other crime fiction comics in the line. 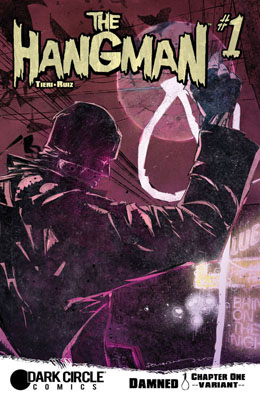 In The Hangman #1: Damned, the storyline is more focused on the criminal. Readers see how he is living a sham life with his family, while secretly committing atrocious killings. (I, for one, don’t think I’ll be eating any Strawberry Jam anytime soon.)

Just as it appears as though this man is going to get away with his sadistic behavior, in swoops The Hangman – a legendary figure intent on terrorizing criminals. Readers learn nothing about him/it, but still can’t help rooting for the necessary retribution. As the comic ends, readers are forced to witness the supernatural elements first-hand. What exactly this means for future issues of The Hangman is still unclear, but regardless, I am hooked and can’t wait to see where this one goes next.

Disclaimer:  A print copy of these comics was provided to BOLO Books by the publisher. No review was promised and the above is an unbiased review of each comic.