The Saints of the Lost and Found – The BOLO Books Review

Occasionally, a book will be released which is virtually impossible to classify. The Saints of the Lost and Found by T. M. Causey is just such a book. Yes, it’s crime fiction, it’s a family drama, it’s magical realism, but it’s just so much more than all of them. Any single designation stifles what is ultimately just a damn good novel.

The Saints of the Lost and Found is the story of Avery Broussard, a woman who has the ability to “see” lost things. What some might imagine being a blessing quickly becomes an unbearable burden for Avery. Imagine being bombarded with sensory overload at every meeting – after all, there is not a person in the world who hasn’t lost something. Growing up in a family of gypsy-type grifters – parents who used Avery’s ability to con people out of their hard-earned cash – Avery (in her later years) naturally tries to use her unique ability for some good. But when a police investigation she is working on goes horrible wrong, Avery wants nothing more than to hide away and keep her special ability hidden. 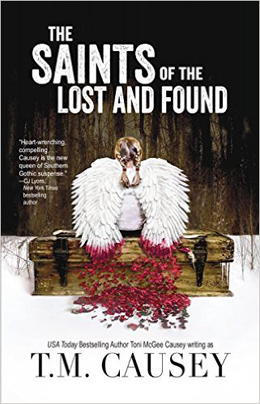 The Saints of the Lost and Found
by T. M. Causey

Yet a call from her estranged father makes that impossible. Avery’s brother is going to die and just maybe Avery can help. Doing so leads Avery right back to her hometown. Along with that comes another opportunity to work with the FBI and a chance to catch an elusive killer; or another chance to fail and tarnish what is left of the Broussard family name.

The Saints of the Lost and Found is rooted in the Southern literary tradition. There are elements of the Gothic and supernatural, but even readers who are not fans of those stylings will find much to love in this novel. The bond between the siblings – Avery and Latham – is palpable from the first moment they are on the page together. This is a work that celebrates family – both the good and the bad parts. It is very hard to say much more plot-wise without venturing into spoiler territory.

T. M. Causey paints a narrative picture with every word she places on the page. There are moments that are almost poetic in both the feeling they elicit from the reader and their ability to mean different things to different readers. By the end of the novel, readers will have been through all the emotions. That is what storytelling is all about. This is not always an easy book to read – some of the topics are painful – but the healing that comes from this hurt is powerful enough to make the journey necessary and worthwhile. To read T. M. Causey’s The Saints of the Lost and Found is to be swept away by the power of words.