In the crime fiction genre, readers could easily fill a yearly to-be-read pile with novels by authors they have read before and/or series books they have been following for eons. But one should not discount the debut novels released each year. Within those books are gems – such as Sunset City by Melissa Ginsburg – and missing them would be the real crime.

Sunset City is the story of Charlotte Ford and Danielle Reeves – two girlhood friends traveling rough, yet divergent roads. When Charlotte’s mother died, it was Danielle who was there to help her move on. Likewise, Charlotte did her best to quell the conflicts between Danielle and her mother. Unfortunately, all this stress took its toll and the two ended up going down the path of drugs, alcohol, and other destructive behaviors. Eventually, Danielle went to jail and the two girls lost touch. 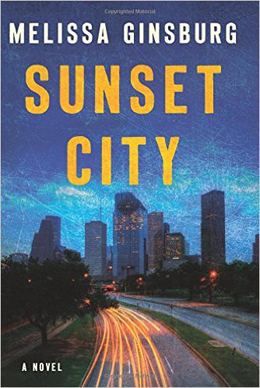 While the novel is completely secular, reading Sunset City feels like a religious experience. Each chapter is like a new melody in this noir hymnal; a survivor’s lamentation. Everyone knows that it is impossible to judge another’s life choices until you have walked in their shoes. As Charlotte begins to make contact with Danielle’s friends, colleagues, and other shifty types, the reader comes to know Danielle in a way that her having her more active on the page could not have accomplished.

Melissa Ginsburg’s economical use of language kept this slim volume (188 pages) moving, but it was clear that each and every word was carefully chosen to convey the correct tone. The chapters are intense, powerful bursts of writing. Each sentence is concise and evocative, not unlike poetry (which is not surprisingly part of Melissa Ginsburg’s publishing history).

The precision with which Melissa Ginsburg depicts inner city Houston will certainly remind readers of Laura Lippman’s early Baltimore books. Location is so very important and Ginsburg has put Houston on the noir map. While the novel requires the visiting of the seedier parts of town, it is obvious that the author has great affinity for the city and readers are likely to come away with a new appreciation for and understanding of the area.

Sunset City is ultimately a book about friendship. It’s a story of lost souls finding each other in a big city. Right from the beginning we know that a reckoning is at hand and in the end, Melissa Ginsburg does not let readers down.