A Head Full of Ghosts –
The BOLO Books Review

Horror novels are often overlooked as part of the thriller genre. While it is true that some readers are not interested in the terrifying moments that come with many books in the style, there are many horror novels that will appeal to readers who might shy away from traditional genre titles. Paul Tremblay’s A Head Full of Ghosts is just such a book. There is a creepiness to the entire proceeding – even some nightmare inducing tableaus – but few outright scares. Instead, readers get a strong domestic drama with a complex narrator and enough suspense to please any thriller fan.

A Head Full of Ghosts is the story of the Barrett family. Living in New England, this husband, wife and two daughters seem like the stereotypical happy family – that is, until John Barrett loses his job and his oldest daughter, Marjorie, begins to show signs of mental illness. A local priest is called in and when he recommends an exorcism, he also suggests that the family consider documenting their journey on a reality television show. Readers learn very early that this path leads to tragedy, but so many questions have to be answered before the truth is known. 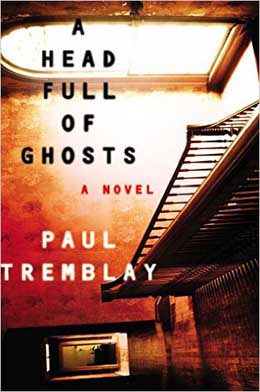 A Head Full of Ghosts by Paul Tremblay

Told mainly from the perspective of Merry, the youngest daughter, reflecting back on the events that occurred when she was just eight-years-old, the reader is forced to question every recollection Merry has. The mixture of memory, bias, and loyalty mesh together to create a compelling narrative – highlighted with some classic horror scenes and some unexpectedly humorous observations.

When Marjorie is exhibiting the signs of demonic possession, her behavior reflects horror stereotypes – foul language, heightened sexuality, and extreme violence, yet in Paul Tremblay’s words, it somehow feels fresh and insightful. Even the family’s reaction to her behavior could be considered cliché, but Tremblay manages to elevate it to new levels.

Interspersed throughout the novel are some blog posts from a leading horror genre aficionado. The posts are at times laugh-out-loud funny, while also being scholarly. One of these chapters – Chapter 14 – reads like a crash course in horror film history. Fans of the genre will be taken back to those moments when each film was seen for the very first time. These blog posts are laser-focused on the resulting reality television show – The Possession – which documented the Barrett Family crisis. Fans of so-called reality TV will recognize many of the hallmarks of that genre, as well as, the criticisms hurled at it.

Make no mistake about it, A Head Full of Ghosts is a horror novel (heck, even Stephen King says he was scared by it), but in the end, Paul Tremblay has essentially crafted a story of a family in crisis. The supernatural elements are present, but Tremblay never loses sight of the heart of the novel – the Barrett family, and more specifically, Merry Barrett. Sensitive readers will want to proceed with caution, of course, but for those who can get beyond the horror label, a rich and realistic story will be a more than satisfactory reward.

Disclaimer: This review is based on the unedited audio version of the novel purchased by the reviewer from Audible.