The Times Square of the Nineteen-Eighties looked vastly different to the family wonderland found in New York City today. Often described as a den of depravity, there is little doubt that at the time it was a sketchy and seedy place, but it was also a place populated by people simply trying to earn a living and make ends meet. It is there – at the intersection of saucy and surviving – that Christa Faust and Gary Phillips have chosen to set their new graphic comic: Peepland.

Peepland is the story of Roxanne “Rox” Bell, who works at one of the countless peepshow venues in the gritty inner-city neighborhood. On Christmas Eve 1986, Dirty Dick Durbin – a two-bit pornographer and friend – bursts into Roxanne’s booth wanting to temporarily stash a VHS videotape within the chair cushions. Later, when the police show up explaining that Durbin is dead, Rox instinctively knows it has something to do with whatever is on that recording. Now, with the police and some other unsavory types hunting for the videotape, Rox is faced with defending her friend’s honor while also trying to stay alive. What secret does this video recording contain and how far will folks go to keep it hidden? 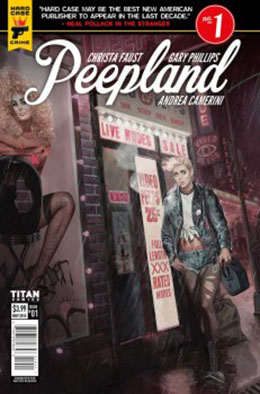 Since this is a Christa Faust and Gary Phillips story, it should go without saying that it pushes the boundaries of an R-rating in the best possible ways. Subplots involve everything from the indignities of AIDS to the relationship struggles of lesbian sex-workers. By the time the first issue ends, the larger plot is really only just beginning. Crime fiction fans that appreciate edgy works will be instantly addicted and will anxiously crave the next hit…er…issue.

Andrea Camerini (artwork) and Marco Lesko (colors) make Peepland a feast for the eyes. Each panel feels both retro and fresh at the same time. And Jimmy Betancourt’s lettering ties it all together.

Even though only the first issue has been released at this point, it’s a pretty safe bet that Faust and Phillips are on their way to the creation of a graphic novel classic here. Peepland strikes a nerve of nostalgia and seems destined to be a fan favorite.