Often, the success of a series rests squarely on the shoulders of the characters who populate the fictional world. Occasionally, it takes several books for that respect to build, but in some cases – such as Tim Weaver’s Chasing the Dead – the reader’s connection to the main character is immediate. The minute David Raker takes the stage, it is clear he’s going to around for quite a few books.

David Raker is a private investigator specializing in missing persons. He is a dedicated worker and often obsesses over his cases as a way to avoid mourning his wife, who recently passed away after an extended fight with cancer. David is thorough and always tries to see the best in people – sometimes to his detriment. 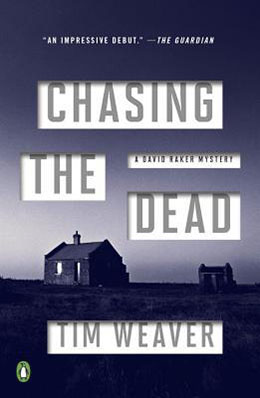 Chasing the Dead by Tim Weaver

In the series debut, Chasing the Dead, David is approached by the mother of Alex Towne, a boy who had been missing for several years before his body was discovered in the wreckage of a car accident a year ago. However, his mother Mary insists that she recently saw Alex across a crowded street and she wants David to locate him.

The novel is eminently readable, with a flow that makes it almost impossible to stop turning pages. Tim Weaver crafts a missing persons investigation that feels authentic. One discovery leads logically to the next and so on – with the unexpected unearthing of more than a few secrets thrown in to keep readers wondering what exactly happened to Alex Towne.

Ultimately, a few of the moments may push credibility to their limits, but Weaver manages to remain on the positive side of the fence. Future books – and investigations – are likely to attempt this tricky balancing act as well, but readers will be more than happy to take the risk with the author. And this is largely due to the strength of the David Raker character. He is one of those creations about whom readers will continue to think long after the last pages are turned.

This debut novel only reached US shores this year, but Tim Weaver has been a success in the UK for some time now, so the good news is that many books in the David Rake series are already written and available – with more on the way. Jump in now and get yourself off the missing persons list of Tim Weaver fans.

Disclaimer: An print copy of this title was provided to BOLO Books by the publisher. No review was promised and the above is an unbiased review of the novel.