Behind Her Eyes – The BOLO Books Review

Some novels arrive with a media buzz attached and one never knows if the reality will live up to the hype. In the case of Behind Her Eyes by Sarah Pinborough, regardless of what readers might think of the unusual genre-hopping, there is no denying that the payoff at the end justifies the means to get there. This is a well-crafted novel – clever and authentic with some deep characterization.

“The truth is different to different people.” This line from three-quarters of the way through Behind Her Eyes works well as one of the themes present in the novel. In a time when truth has become an elusive idea, Sarah Pinborough does us a favor by reminding us that while “truth” really can’t be changed, how different individuals view something does skew and influence their perspective on those things.

In the last few years, it has become almost de rigueur for domestic suspense to be told through the lens of an unreliable narrator. Countless academic journal articles could – and will – be written about why these narrators are often unstable women, with drug and/or alcohol addiction, very few friends, and questionable romantic relationships. Pinborough follows this trend, yet takes it a step further by giving readers not one, but two such characters. 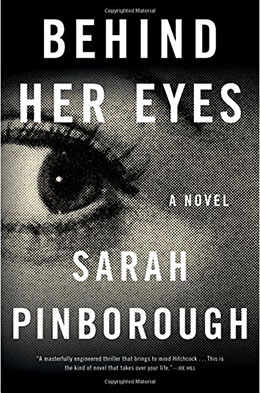 Behind Her Eyes by Sarah Pinborough

First there is Adele. Married to her first love, she has suffered from depression and other psychological ailments since her parents were killed in a house fire when she was seventeen. After a stay in an institution, she is making strides toward a “normal” life. A recent move with her husband – David, a therapist – where she meets a woman who seems like the perfect friend is just another stage in her journey.

That woman is Louise. Louise is a part-time secretary at David’s clinic. The mother of a young son, she is still dealing with the self-doubt that a failed marriage can cause. An infatuation with David – which quickly becomes much more – makes her friendship with Adele a questionable decision, but her sense that Adele may need her for more than simply friendship allows her to ignore the more common sense approach of cutting ties with this new-found acquaintance.

On the periphery, but with more than a fair share of the answers, is Rob. A fellow patient at the institution, Rob forged a bond with Adele during their time in isolation. Like both Adele and Louise, Rob suffers from night terrors and the journal he kept during this hospitalization may contain the doorway to the truth. But what good are answers if you don’t know the question?

Sarah Pinborough’s writing strings readers along with just enough tantalizing details to make putting the book down incredibly difficult. While events towards the end of the novel will require a bit more than the average suspension of disbelief, the reward is worth it. Spoilers would abound in any further discussion of Behind Her Eyes and readers really need to experience the book as whole before any opinions can be made.

While this all might sound a bit prosaic, what Sarah Pinborough has accomplished is rather unique. How readers will react to it will likely be sharply divided between those who applaud the inventiveness and those who feel unwittingly duped. I venture to say that either way, readers will be pleased that they read Behind Her Eyes and can be part of the conversation which will inevitably be generated by the novel.