One of the most powerful things about fiction is that at times it can allow us to experience in a tangible way situations that are foreign to us. Some novels allow us to travel to a distant time or place, walk in the footsteps of another, or see events through another’s eyes. What these methods have in common is that they reach the reader in ways that can actively affect real lives, not just those of the fictional characters on the page.

In My Sister’s Bones, Nuala Ellwood has crafted a story that envelopes readers in the experiences of the other. The novel covers everything from the plight of Syrian refugees to post-traumatic stress disorder; from domestic abuse to hints of human trafficking, to name just a few. And Nuala does it all without getting mired down in maudlin moods or depressive dispositions. She allows the reader to feel the suffering these characters face, thereby eliciting empathy while also telling a twisting tale that is virtually impossible to put down. 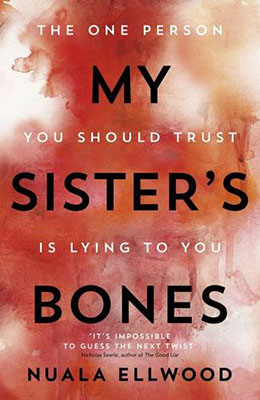 My Sister’s Bones by Nuala Ellwood

My Sister’s Bones is a psychological suspense novel of the highest order. As the novel begins, Kate Rafter is returning to her childhood home after her mother’s death. Years previously, Kate had fled, leaving behind her younger sister, Sally. Sally has become an alcoholic, she rarely leaves her home, and her marriage is on the rocks. Meanwhile, Kate has become a celebrated war reporter, covering events in Afghanistan, Iraq, and Aleppo, Syria. Tragic experiences on her most recent deployment have left her mind scarred and returning home is only adding to the stress.

Once in your mother’s home, Kate begins to hear a child’s cries out in the night and eventually she thinks she sees a boy out in the garden. But is her mind playing tricks on her? Her psychiatrist is convinced that she has not come to terms with the death of a young charge in Aleppo nor with the death of her toddler brother years previously. Her sister won’t speak to her and even Kate’s own drinking is becoming a problem. Alternating chapters hint at a future violent confrontation that has landed Kate in the police department.

Nuala Ellwood has crafted this novel in such a way that readers really are not sure where things are going, or what actions are most pertinent. Just past mid-way there is a shift in focus which alters the entire reading experience. What was originally a leisurely exploration of a damaged mind becomes a time-sensitive thriller. The closer the reader gets to the end, the faster the pages fly. And the surprises never cease – right through to the final moments.

My Sister’s Bones wears its heart on its sleeve. The controversial topics covered are as timely as ever, and yet this is not a heavy-handed or depressing reading experience. Nuala Ellwood has a gift for making difficult subject matter entertaining without being simplistic or dismissive of her complex topics. I suspect My Sister’s Bones will be a book that is repeatedly referenced as a highlight throughout the coming year.