Sara Blaedel is the Denmark-based author of the Louise Rick mystery series. Next week, the sixth book to be translated into English will be released. Like its predecessors, The Lost Woman uses the tropes of the crime fiction genre in order to tackle topical and controversial concerns in an entertaining and enlightening way.

In The Lost Woman, Louise Rick is called in to consult on the murder of a Danish woman who has been killed in an odd sniper shooting while standing within the safety and security of her own home. When it is later revealed that this particular woman had been reported missing eighteen years earlier by Louise’s current boyfriend (and has been off the radar ever since), the peculiarities of the case continue to mount. By the time Eik is arrested for the murder, Louise is the only person still supporting him. But is her loyalty misplaced? 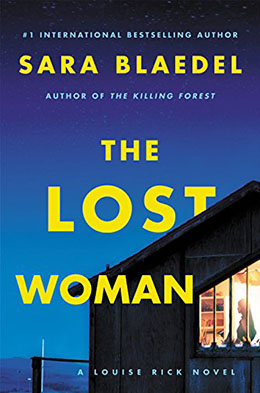 The Lost Woman by Sara Blaedel

The ensuing investigation crosses from Denmark to England and back again. As Louise digs into this woman’s mysterious past, she is forced to confront her own beliefs on a number of controversial subjects ranging from assisted suicide to religion – topics for which there are rarely concrete, easy answers.

Once again, Sara Blaedel demonstrates her talent for writing eminently readable plot-lines. The way the reveals in The Lost Woman are doled out could be a master class in extended suspense – with new revelations appearing just when the reader wants them – ensuring a very long night spent consuming this novel.

Fans of the series know that it is Louise Rick and her friend, journalist Camilla Lind, who keep readers coming back. Of course, the crime fiction genre is replete with strong female characters, but there is a uniqueness to these two which is impossible to narrow down. To “meet” them is to love them. They are kind, compassionate, and kick-ass – a combination guaranteed to intimidate. As a team, they are unstoppable; knowing one another’s flaws they are able to avoid common errors in judgement by trusting each other.

This novel is the ideal mixture of police procedural, domestic suspense, and erudite discussion. The Lost Woman is one of those books that will leave you in awe. Sara Blaedel makes writing appear easy. While there is little doubt that the original Dutch version also reads very naturally, it would be unfortunate not to mention the excellent translation here by Mark Kline.

The Nordic counties are putting out some amazing crime fiction of late – actually for quite a few years now – so if you haven’t yet tackled the available writing from that part of the world, do yourself a favor and rectify that immediately. The work of Sara Blaedel would certainly be the perfect launching point.