For a while there, it seemed that serial killer novels were being released every other minute – to the point that the power of each new book was diluted. Thankfully that trend seems to have run its course, allowing the occasional title that is released to garner more than a passing glace. One of those worthwhile releases is UNSUB, the new novel from Meg Gardiner.

Inspired by the Zodiac murders, Meg Gardiner crafts a serial killer called The Prophet – a vicious villain who terrorized San Francisco almost two decades ago. The plot of UNSUB deals with the re-emergence of this clever criminal (or a copycat who knows more than the general public about those earlier murders) as he begins to taunt the daughter of the policeman who hunted him all those years ago. Caitlin Hendrix, now a rookie cop herself, working her first homicide case, may prove to be this killer’s fiercest adversary yet. 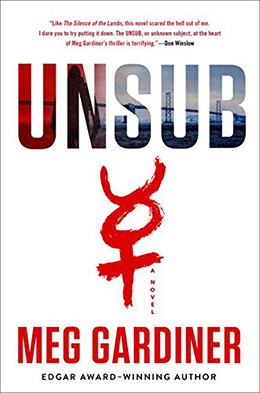 UNSUB is well structured: starting in the past, before shifting the focus to Caitlin’s investigation of the current crimes. With well-placed flashbacks, Meg Gardiner keeps the tension growing in incremental degrees, to the point that readers will be turning on all the lights and locking every door as they near the climax. In a change of pace for this style of novel, the identity of the killer is revealed two-thirds of the way through UNSUB shifting the action from that point on into classic thriller territory, to great effect.

Readers will be thrilled to know that UNSUB is the start of a series because Caitlin Hendrix is a character with untold facets to be uncovered. Easy to root for, she is also flawed in countless ways. Everything in Caitlin’s life seems to be based on conflict – interactions with family, friends, colleagues, and even the love of her life sit precariously on the edge. The dynamic between Caitlin and her father is particularly complex and Gardiner makes sure to explore its depths without losing the momentum at the core of UNSUB.

No serial killer would be complete without a unique modus operandi and The Prophet is no exception. Marking all of the victims with the astrological sign for mercury – which just happens to resemble a devil – is just the beginning of his craftiness. UNSUB is not for the squeamish; Meg Gardiner pulls no punches in her depictions of these horrendous crime scenes. However, if you are a fan of this type of novel, UNSUB is sure to be a compulsively additive reading experience.

It seems fitting given the cinematic nature of the writing that UNSUB has already been optioned for adaptation to the screen. Caitlin Hendrix and The Prophet surely belong in the hollowed halls once occupied by Clarice Starling and Hannibal Lecter.