In the fickle world of publishing, a strong hook can mean the difference between a book hitting the bestseller list and that same book floundering on the remainders table. Throughout her career, Hallie Ephron has proven to be a master at crafting the hook and her latest release is no different. Readers will find it impossible to resist snatching up You’ll Never Know, Dear once they hear the novel’s premise: the story centers on a doll-maker whose youngest daughter was kidnapped along with her custom doll. When forty years later, that custom doll is brought to the mother for repair, the mystery of what happened all the years ago is about to be revealed.

Unlike many of her contemporaries, Hallie Ephron takes her time between book releases and rather than creating a series, Ephron prefers to write stand-alone tales of suspense. You’ll Never Know, Dear does not rely on illogical twists or an action-packed denouement to entice its readers, but rather is a tightly-plotted story in which each revelation and line of inquiry grows organically from what precedes it. This novel is so believable and realistic that it reads almost like a non-fiction account of one family’s tragic history. 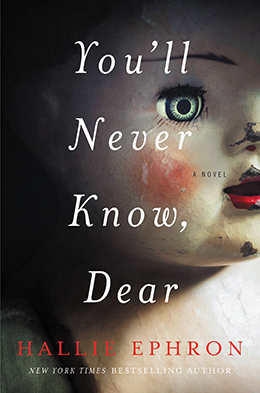 When Elizabeth (Lis) Woodham was seven years old, she was supposed to be watching over her younger sister, but after being distracted by a lost puppy, it was discovered that Janey was gone. The police investigated to no avail, but her mother, Miss Sorrell, has never given up hope and every year places a classified ad in the local newspaper. However, no one expected that forty years later, the arrival of Janey’s doll would open old wounds and finally provide long sought-after answers. Before anyone can question the doll’s owner, she flees the scene and shortly after, Miss Sorrell’s home is burglarized. Oddly, however, the only thing taken is Miss Sorrell’s prized collection of rare dolls. Afterward, Lis makes it her mission to track down this stranger who had Janey’s doll and find out what she knows about her sister’s disappearance.

You’ll Never Know, Dear is a relatively short novel, so readers are going to find it virtually impossible to stop reading until the back cover is closed. As each new discovery is made, the truth becomes clearer. In many ways, the ultimate resolution of the novel is inevitable, but Ephron’s path to that ending is anything but expected. In true suspense style, readers are just barely one step ahead of the characters at each stage of the investigation.

Hallie Ephron is a writing treasure. It would not be surprising to discover that reader’s treat her novels like Miss Sorrell handles her beloved doll collection – that is, by placing them in a cherished location, able to be admired by all, and occasionally taken off the shelf and held reverentially. You’ll Never Know, Dear belongs is such an esteemed location.