Gin Phillips’ Fierce Kingdom manages to succeed as both a thriller and a mediation on motherhood – not an easy task by any stretch of the imagination. Fierce Kingdom is a slim volume in terms of page count, but certainly not when it comes to understanding the maternal instincts associated with a child in peril.

Joan loves to take her son Lincoln to the zoo in the late afternoon when the crowds have dispersed, but on this particular day that choice could be the difference between life and death. As Joan hustles Lincoln to the exit, her eye catches some unusual activity barring their way. There is a man in dressed in black with at least one gun – and the ground is littered with casualties. Grabbing her son, Joan heads into the depths of the zoo desperate to remain hidden.

For the next three hours, Joan does everything possible to keep her son safe and calm, even as she knows this active shooter situation is far more dire than she can let on. 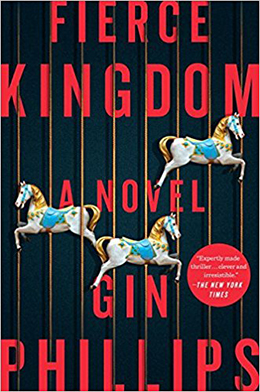 Gin Phillips keeps the tension high and the action credible, but it is the bond between mother and child that will keep readers turning the pages. The characterization of these two unique individuals is so convincing that readers will fully expect them to walk out of the pages of the book and into reality.

The fierce kingdom of the title takes on multiple meanings. Of course, it alludes to the physical zoo with its menagerie of animals, but at various times it is also an apt description of the complexity of Lincoln’s imaginary world, Joan’s complicated family history, the verisimilitude of television programs (Joan’s favorite show is Scarecrow and Mrs. King), and the uncertainty of both nature and the human mind.

While the majority of the novel is told from Joan’s perspective, there are chapters from the points of view of a few others. One overarching theme of each section – including Joan’s – is the idea of isolation and the dangers associated with it.

As stated earlier, Fierce Kingdom is very much a thriller but those looking for standard action set-pieces and thrilling daring-do would do best to look elsewhere. This novel is more about the threat and the risks a mother will take in order to ensure the safety of her child. It is a bit like Heart of Darkness only the African jungle is now a jungle gym (or a carousel really) and the reality is that the malignant force is far more similar to the prey than anyone would like to admit.