All the Beautiful Lies – The BOLO Books Review

Peter Swanson’s All the Beautiful Lies owes a fair bit of debt to Vladimir Nabokov’s Lolilta. Like the illicit “relationship” that forms the core of that classic novel, Swanson’s book deals with cross-generational obsession – except in the case of All the Beautiful Lies various permutations of this are explored across time and with varying degrees of maliciousness. It is at times an uncomfortable read, but Swanson is a writer who knows what he is doing and his subtle manipulation of his readers is masterful.

All the Beautiful Lies begins with Harry Ackerson receiving notice that his father has died under unusual circumstances. The Ackerson patriarch’s fall could have been an accident, suicide, murder, or just a random mugging gone wrong. Harry must return to the quaint town in Maine where he summered in his youth – both to console his stepmother, Alice, and to find closure with this unexpected passing. 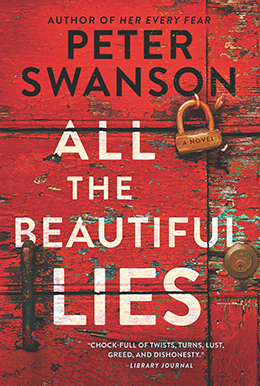 To say that Harry’s relationship with Alice is complicated would be putting it mildly. Still mourning the loss of his real mother to illness, Harry was not really interested in forging new bonds when he was younger, especially since he would be heading off to school soon. Their relationship was always amicable and Harry could certainly understand why his father was drawn to her unique sensuality. More mature now, Harry has a better grasp of the magnetic pull of mysterious women.

Once back in the Victorian home near Kennewick Beach, Harry finds that there are more questions that answers awaiting him. Everyone expects him to take over his father’s rare-book business, but this is not his dream. That is, until another woman enters the bookstore looking for a part-time job. Grace McGowan is an enigma. She claims to be new to the area, but then why did she attend the funeral for Harry’s father? Crime fiction fans will enjoy the references to favorite crime novels and book-selling tips that pepper the plot with authenticity.

As all of this unfolds, Peter Swanson gives readers glimpses into the history of these characters – especially Alice. One might think this would help to elucidate these character’s behaviors and motivations, but in true crime fiction style it really creates more unexplored avenues where deadly secrets may reside.

All the Beautiful Lies is not a plot-heavy novel. This is very much a deep dig into character. Those who prefer to read about people they like would do better to look elsewhere as these characters are all so incredibly flawed; but those that enjoy exploring the psychology behind people’s masks will find this journey gripping. As he has done with his other novels, Peter Swanson enjoys twisting his tales to defy reader expectations.

All the Beautiful Lies is very different from Peter Swanson’s last book, Her Every Fear, but readers who venture into this miasma of dysfunction will almost certainly have strong feelings about the novel – one way or another.

BUY LINKS: All the Beautiful Lies by Peter Swanson