Aimee Molloy’s The Perfect Mother is a both a twisted suspense yarn and a subtle satire aimed at society’s unrealistic expectations of motherhood. Fans of psychological and domestic suspense will find much to enjoy in this tale of suburban intrigue, but it is the incisive excavation of new motherhood that will linger the longest in reader’s memory.

The May Mothers are a group of women – and one man – who all became first time parents within the same month. They have been gathering regularly to celebrate and commiserate with like-minded individuals throughout their pregnancies. Now that their babies are born, the May Mothers decide it is time for a night out – a much-needed breather from the stress and demands of having a newborn to care for. Little do they know, this decision is about to start them down a tragic path that will leave none of them unscathed. 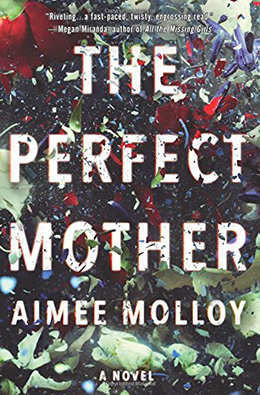 While the gang is celebrating the Fourth of July evening out at a trendy Brooklyn hotspot, Winnie’s son Midas is stolen from his crib right under the nose of the hired babysitter. As the investigation into what happened that evening unfolds, readers will find themselves worried for Midas’ welfare and the various pivots within each woman’s accounts of that night will keep the pages turning in an attempt to ferret out the truth.

However, the true genius of the novel comes from the way Aimee Molloy is able to weave in relatable situations faced by all new mothers. Each of these characters has a different journey and seeing how each confronts the surprises, expectations, and judgments that come along with the more mundane strains of parenting is just as gripping as the suspense plot that acts as reader’s guidepost through the story.

Feeling guilty because they arranged the night out, three of the May Mothers begin their own amateur investigation into Midas’ disappearance. Some readers will find their access to some information stains credibility, but Molloy navigates those challenges in creative – if not always completely realistic – ways. The result is never less than entertaining and the fact that film rights have already been sold (with Kerry Washington attached, no less) is not a surprise.

In the audiobook version, Broadway and television actress Cristin Milioti skillfully imbues each of these women with a distinct personality via accents and speech patterns that bring Aimee Molloy’s characters to life.

The Perfect Mother is a promising fiction debut, and readers – now fans – will be eager to follow Aimee Molloy down whatever avenue she ducks into next.