Two thousand and eighteen just might become the year of the domestic thriller. Authors are blending the global and the intimate in fresh and exciting ways. Just as Karen Cleveland did in Need to Know, Bryan Reardon manages to use the backdrop of a political incident as a means to explore the lives of one singular family in his new novel, The Real Michael Swann.

It begins with a phone call. While traveling home from a job interview, Michael Swann makes a quick call to his wife, Julia. During the course of the conversation, the connection is lost and knowing that he is in Penn Station, Julia thinks nothing more of it. That is until she sits down to watch television with her sons. Their program is interrupted by a special news report announcing that an explosion in Penn Station has occurred. In that moment, Julia Swann’s life changes forever. 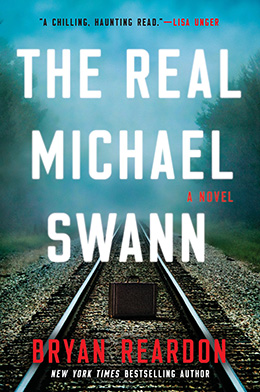 Bryan Reardon uses dual narratives to tell his story. Julia recounts her actions and reactions after this devastating news; as Michael, who has suffered injuries and amnesia from the incident, tells of his confusion and fear as he tries to navigate a world with memory loss. Of course, in both narratives, the nature of the incident is explored as well, as readers will have many questions about what happened and why.

As these two tales circle each other, Reardon also provides some flashback chapters that document how the Swanns met, their courtship, and the early stages of their marriage. Rather than feeling like intrusions into this tense modern-day scenario, these glimpses of domestic life serve to deepen the characterization of our main players and could easily succeed as a literary novella all on their own. Rest assured that Reardon is structuring the novel in this way intentionally and these anecdotes eventually become catalysts.

Without spoiling anything, there is a sense that the theme of The Real Michael Swann reflects upon how we function in society and how the World works on – and sometimes against – us. Each human is constantly changing and various outside stimuli can have undo influence on that development. How each person chooses to react to unexpected stresses is the core of our humanity. By watching these two characters navigate these challenges, readers are forced to reflect upon their own lives and to contemplate how they might react in similar situations. Just as he showed with his debut, Finding Jake, Bryan Reardon also understands the unique power and bond of family units.

Bryan Reardon’s writing style displays both ease and finesse, making the reading of The Real Michael Swann a swift and enjoyable experience. Chapters consistently end with cliff-hanger moments, virtually forcing the reader to continue. This stand-alone novel is perfect for summer vacations and book club discussions.