Another week and another list of new books. Featured this week are everything from literary fiction to cozy crime; from classics to modern psychological suspense. 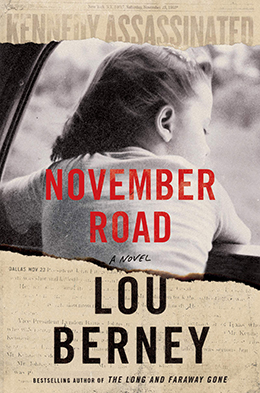 As you can no doubt tell from my spoiler-free review of November Road, I am confident in saying that it will be one of the biggest book releases of the year. And if you are want to get ahead of the curve for next year’s crime fiction award short lists, add this title to your reading pile immediately. In a year where we have seen some absolutely stellar books released, it says something when a book has this much advance buzz. Often marketing over-hypes their books, but in the case of this Lou Berney “future classic,” any buzz you hear is deserved and possibly even under-sells in regard to the significance of this new release.

Set against the assassination of JFK, a poignant and evocative crime novel that centers on a desperate cat-and-mouse chase across 1960s America—a story of unexpected connections, daring possibilities, and the hope of second chances from the Edgar Award-winning author of The Long and Faraway Gone.

A loyal street lieutenant to New Orleans’ mob boss Carlos Marcello, Guidry has learned that everybody is expendable. But now it’s his turn—he knows too much about the crime of the century: the assassination of President John F. Kennedy.

Within hours of JFK’s murder, everyone with ties to Marcello is turning up dead, and Guidry suspects he’s next: he was in Dallas on an errand for the boss less than two weeks before the president was shot. With few good options, Guidry hits the road to Las Vegas, to see an old associate—a dangerous man who hates Marcello enough to help Guidry vanish.

Guidry knows that the first rule of running is “don’t stop,” but when he sees a beautiful housewife on the side of the road with a broken-down car, two little daughters and a dog in the back seat, he sees the perfect disguise to cover his tracks from the hit men on his tail. Posing as an insurance man, Guidry offers to help Charlotte reach her destination, California. If she accompanies him to Vegas, he can help her get a new car.

For her, it’s more than a car— it’s an escape. She’s on the run too, from a stifling existence in small-town Oklahoma and a kindly husband who’s a hopeless drunk.

It’s an American story: two strangers meet to share the open road west, a dream, a hope—and find each other on the way.

Charlotte sees that he’s strong and kind; Guidry discovers that she’s smart and funny. He learns that’s she determined to give herself and her kids a new life; she can’t know that he’s desperate to leave his old one behind.

Another rule—fugitives shouldn’t fall in love, especially with each other. A road isn’t just a road, it’s a trail, and Guidry’s ruthless and relentless hunters are closing in on him. But now Guidry doesn’t want to just survive, he wants to really live, maybe for the first time.

Everyone’s expendable, or they should be, but now Guidry just can’t throw away the woman he’s come to love. 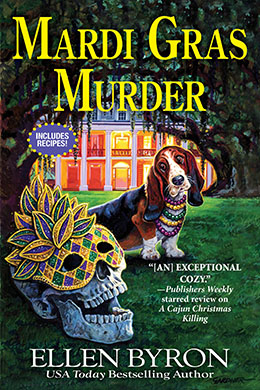 As she often does, Ellen Byron weaves some fascinating history into her well-crafted cozy mystery plot. Byron’s stock-in-trade is humor and despite the serious nature of things at the core, the laughs always feel earned and never forced. Four books into the series, readers have come to know and love these characters.

Southern charm meets the dark mystery of the bayou as a hundred-year flood, a malicious murder, and a most unusual Mardi Gras converge at the Crozat Plantation B&B.

It’s Mardi Gras season on the bayou, which means parades, pageantry, and gumbo galore. But when a flood upends life in the tiny town of Pelican, Louisiana―and deposits a body of a stranger behind the Crozat Plantation B&B―the celebration takes a decidedly dark turn. The citizens of Pelican are ready to Laissez les bon temps rouler―but there’s beaucoup bad blood on hand this Mardi Gras.

Maggie Crozat is determined to give the stranger a name and find out why he was murdered. The post-flood recovery has delayed the opening of a controversial exhibit about the little-known Louisiana Orphan Train. And when a judge for the Miss Pelican Mardi Gras Gumbo Queen pageant is shot, Maggie’s convinced the murder is connected to the body on the bayou. Does someone covet the pageant queen crown enough to kill for it? Could the deaths be related to the Orphan Train, which delivered its last charges to Louisiana in 1929? The leads are thin on this Fat Tuesday―and until the killer is unmasked, no one in Pelican is safe. 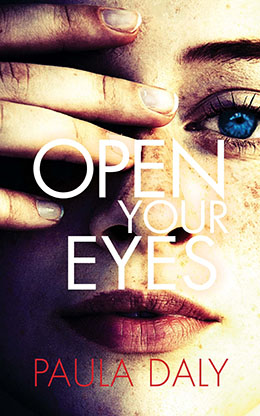 Paula Daly should be more widely read then she currently is. I reviewed her excellent Keep Your Friends Close back in 2014 and she had continued to write excellent books year after year. The latest is a domestic suspense tale with strong psychological suspense elements.

Jane Campbell avoids confrontation at any costs. Given the choice, she’ll always let her husband, Leon―a bestselling crime writer―take the lead, while she focuses on her two precious young children and her job as a creative writing teacher. After she receives another rejection for her novel, Leon urges Jane to put her hobby to rest. And why shouldn’t she, when through Jane’s rose-tinted glasses, they appear to have the perfect house and the perfect life?

But then Leon is brutally attacked in their driveway while their children wait quietly in the car, and suddenly, their perfect life becomes the stuff of nightmares. Who would commit such a hateful offense in broad daylight? With her husband in a coma, Jane must open her eyes to the problems in her life, as well as the secrets that have been kept from her. Although she might not like what she sees, if she’s committed to discovering who hurt her husband―and why―Jane must take matters into her own hands.

A surprising and gripping thriller of pride, ambition, and envy, Open Your Eyes is an unsettling whodunit about the illusions of a perfect marriage that confirms Paula Daly as a writer at the forefront of domestic suspense. 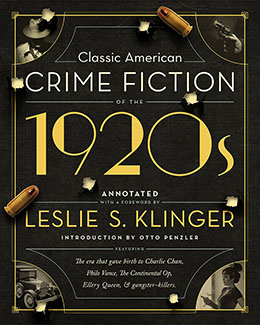 This should have been on last week’s list, but it’s such am important release, that I am making room for it this week. In order to understand our current crime fiction, it’s necessary to understand where we have come from. Here Leslie S. Klinger presents five classic crime fiction novels in a beautiful new edition – perfect for your holiday gift-giving needs.

A riveting collection of five of the most famous crime novels of the 1920s, presenting anew some of the most admired authors of the era―with insightful annotations by the Edgar-winning anthologist Leslie S. Klinger.

American crime writing was reborn in the 1920s. After years of dominance by British authors, new American writers―with fresh ideas about the detective and the mystery―appeared on the scene and rose to heights of popularity not witnessed since the success of the Sherlock Holmes tales in America.

Classic American Crime Writing of the 1920s―including House Without a Key, The Benson Murder Case, The Roman Hat Mystery, Red Harvest, and Little Caesar―offers some of the very best of that decade’s writing. Earl Derr Biggers wrote about Charlie Chan, a Chinese-American detective, at a time when racism was rampant. S. S. Van Dine invented Philo Vance, an effete, rich amateur psychologist who flourished while America danced and the stock market rose. The quintessential American detective Ellery Queen leapt onto the stage, to remain popular for fifty years. Dashiell Hammett brings readers another mystery narrated by the Continental Op. W. R. Burnett, created the indelible character of Rico, the first gangster antihero.

Each of the five novels included is presented in its original published form, with extensive historical and cultural annotations and illustrations added by Edgar-winning editor Leslie S. Klinger, allowing the reader to experience the story to its fullest. Klinger’s detailed foreword gives an overview of the history of American crime writing from its beginnings in the early years of America to the twentieth century. This gorgeously illustrated volume includes over 100 color and black and white images as well as an introduction by the eminent mystery publisher Otto Penzler.

Over 100 color and black-and-white illustrations